Recently, I visited the Hockey Hall of Fame to research an article on Owen Sound-product and Toronto Maple Leaf great, Hap Day.

As I drove home that day, I reflected upon the impact that hockey has on the lives of Canadians. Hockey is more than a form of entertainment. For many of us, it is an intrinsic part of being Canadian.

Early newspapers reported the scores of hockey games between neighbouring communities. Victories boosted community pride and the players on home town teams were heroes. Old diaries and interviews with those of the senior generation paint a picture of -men and boys skating for hours on frozen rivers, lakes and inlets.

The advent of radio provided hockey as another form of entertainment during the snowy winters of Grey and Bruce. My mother remembers Saturday nights when neighbours would arrive in their horse and cutters to their Allenford-area farm.

The men would huddle around the radio and listen to Foster Hewitt, while 'the women would chat in the kitchen making sandwiches and tea. After the game, while refreshments were being served, conversation focused not only on the game, but also local hockey activities. A scene repeated in farm houses all across Canada.

As a young boy growing up in Owen Sound, some of my fondest memories are of getting up early before school and clumping in my skates down to the rink that my friends and I had so carefully, with the help of our fathers, packed and flooded.

On weekdays, we would play hockey before and after school. On weekends, we would often skate from early morning until our parents dragged us home, often at 9 or 10 in the evening. As we played, we tried to emulate our heroes.

While most of us played hockey, few made it to the National Hockey League. When our personal aspirations for hockey stardom faded, we lived our dreams through our heroes. We followed them through newspaper reports, on the radio, and on television. When a local boy made it to the NHL, there was a sense of pride in having known him, no matter how remote the connection. 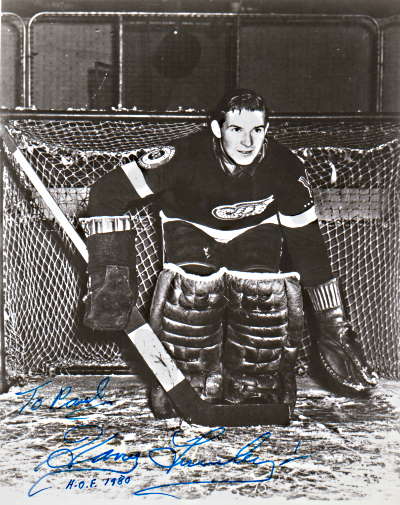 In this area, every generation has had its own local hero. For my grandfather, it was Fred "Cyclone" Taylor from Tara; my father cheered for Owen Sound's Harry Lumley. Mine were Bruce County's Paul Henderson and Jim Schoenfeld, who once played with the Owen Sound Greys. These are but four of the many who left the Grey-Bruce area to play professional hockey.

Perhaps it was home-town pride, but I just knew that the Grey-Bruce area had made an important contribution to the game of hockey. When I called Craig Campbell Resource Centre Manager at the Hockey Hall of Fame, he suggested that I pay a visit and look around.

At the first display that I visited, The Year in Review, Owen Sound was represented by Plater goalie Jamie Storr whose mask from the 1995 Canadian gold medal world junior championship team was on display. In this exhibit, there were mementos from all the 1995 international and national hockey champions. 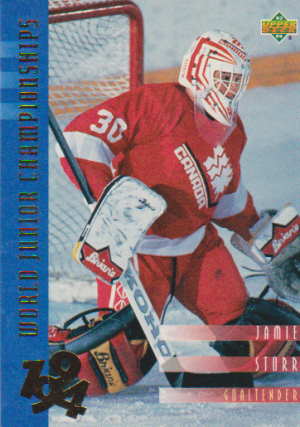 Next, I stopped at the North American Hockey Zone computer. Here, you enter a community name and the screen shows pictures of teams and individuals from that vicinity. Unfortunately, the Grey-Bruce area was missing from the computer's memory bank. How could such a hockey haven be missing from the Hockey Hall of Fame? I was told that this was a service which required someone from each town to collect the information and pay a $25 fee to the Hall.

Undeterred, I went to the trophy category in the computer and, sure enough, Owen Sound was well represented. There were pictures and descriptions of the 1924 and 1927 Calder Cup champion Owen Sound Greys. In the Allan Cup division, I found the 1951 Owen Sound Mercurys featuring players such as Buck Forslund, Tom Burlington and Les Binkley.

There were many other displays to absorb hockey enthusiasts, but two had direct interest to those of us from the Grey-Bruce area. Paul Henderson, hero of the 1972 Canada-Russia series, had his stick which scored the goal "heard around the world" and his jersey as the focal point of one display.

There was a special display honouring Taylor, King Clancy and Howie Morenz. This tribute included sticks, photos and other memorabilia of these three hockey legends.

Next stop on the tour was the Bell Great Hall, the sanctuary dedicated to the very best that the game has known.

In the inner-sanctum of the room, I found the plaques of those considered to be the greatest ever to play the game of hockey, the elected members of the Hockey Hall of Fame.

Here I found the plaques detailing the careers and achievements of Taylor, Lumley and Day. Campbell asked me if I would like to see the archive's usually off-limits storage vaults.

Upon entering I was awestruck. I found rows of jerseys, equipment and other memorabilia — a Stratford Kroehler jacket donated by adopted Owen Sounder Red Leckie and a 1991-92 Platers jersey owned by Jason Buetow. Space is limited in the main Hall, so some displays are rotated in and out of storage, Campbell explained.

As I drove home that day, I was struck by the fact that the Grey-Bruce region is indeed well-represented in the Hockey Hall of Fame. I considered who might be the next player from this area to be honoured.

Some things never change in the game of hockey. Youngsters will always dream of making it to the big league and the not so young will always talk about their memories of current big leaguers when they were kids. Hockey is indeed a Canadian way of life and the Grey-Bruce region has made a significant impact on the world of hockey.

I would like to thank Ted Briggs, former sports editor of the Sun Times for sharing his wealth of knowledge about Owen Sound hockey history.

A version of this article originally appeared in my Local History column in the Owen Sound Sun Times on February 3, 1996.