Doug Brindley: From Maple Draft Choice to a role in the movie, Slap Shot: a Memorial Cup champ; coached by Don Cherry; and he played in the WHA; what more could a Walkerton, Ontario native ask for in a hockey career?

Young boys like to dream about playing hockey with or against their favourite players. Either playing road hockey or in a backyard rink, dreams of the NHL and stardom playing Canada's game is very much a part of the mystique of the game. For one young lad growing up in Walkerton Ontario in the 1950s and 1960s these dreams became a reality that went one step further, all the way to Hollywood!

The second-round pick of the Toronto Maple Leafs in the 1969 NHL Amateur Draft. The 20th overall pick, Doug Brindley would only suit up with the blue and white for three NHL games and he would never record a single scoring point in the National Hockey League. But he would have a role to play that would make him part of hockey folklore.

Brindley was born in Walkerton, Ontario on June 8, 1949. He played minor hockey in his hometown. But the 1964-65 International Bantam Hockey tournament in Georgetown turned out to be an important event for the young hockey player with the Walkerton Bantam hockey club. Doug Brindley was named the tournament M.V.P. His play caught the eye of several hockey scouts.

Doug was drafted by the Niagara Falls Flyers and he split the 1965-66 season with the Flyers and the Stamford Hornets of the Niagara Jr. B Hockey League. The next season Brindley found himself back in his home region playing for the Owen Sound Greys. During the 1966-67 season he tied for the scoring lead on the Greys.

His 40 goals in regular season play and his 12 goals in the Niagara Falls Flyers' march to the Memorial Cup without a doubt were a large reason why the Maple Leafs drafted him.

Doug spent the 1969-70 season playing for Toronto’s farm club in Tulsa, Oklahoma. He notched 22 goals and 25 assists. To show that his rookie year in professional hockey had not been a fluke, Brindley improved his numbers to 29 goals and 38 assists the next season. His prolific scoring earned him a trip to the NHL. He skated with the Leafs for 3 games without registering a point.

The 1971-72 season found Brindley playing for the Rochester Americans after he had been traded to Vancouver for Andre Hines. At Rochester one of his team mates, and later the same season, his coach, was Don Cherry. In a 1997 interview, Doug recalled that Cherry was "always a gentleman" and he was a "good guy to help the new guy along" when they arrived in Rochester. Brindley said that Cherry's attitude as coach was simply "it didn't matter who you were, there were no favourites on his team".

Probably because his NHL future looked cloudy at best, Brindley decided that he needed a change of hockey scenery. Doug signed with the Cleveland Crusaders of the World Hockey Association for the 1972-73 season.

He played two seasons in the WHA netting 15 goals his first season and 13 his second term. Among his teammates in Cleveland was All-Star netminder Gerry Cheevers and former Toronto Maple Leaf farmhand and teammate Ron Ward. 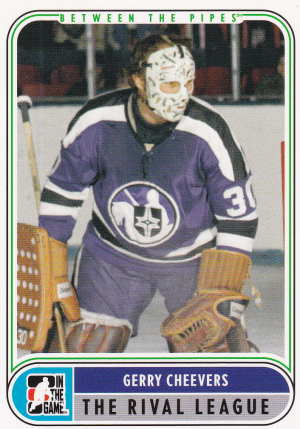 A highlight for Brindley in the WHA was that he got to play against two of his boyhood heroes, Bobby Hull and Gordie Howe! He said that both hockey legends were consummate gentlemen. However, even though he was in awe of Howe, Doug laughed saying that he quickly learned "to keep his head up in the corners" as those legendary Howe elbows were deadly!

Doug Brindley retired at the end of the 1976 season. However, he had another moment of stardom in his hockey career awaiting him. He was asked to play in the Paul Newman movie, Slap Shot. His role was that of a player for the villainous Syracuse Bulldogs. He reported that Newman was a nice person to work with and that Newman's hockey double was Rod Bloomfield, a hockey player from Owen Sound!

Doug Brindley's hockey talents took him a long way from his home in Walkerton. He played for the Toronto Maple Leafs and got to experience the coaching talents of Don Cherry first hand. His opponents included Bobby Hull, and the greatest player of all time, Gordie Howe. He had a role in a Hollywood movie and met Paul Newman.

Doug Brindley really led a life that all young hockey players dream about!

A version of this story first appeared in my Sports History column in the Owen Sound Sun Times in March 1997.