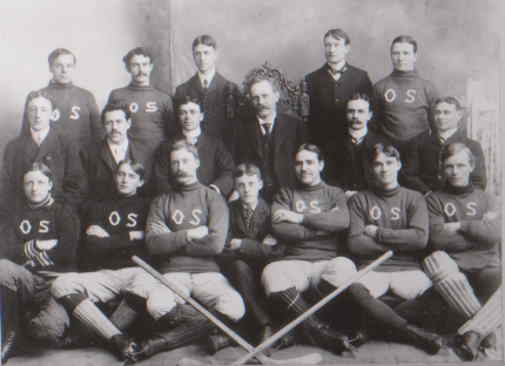 Although there are some references to organized hockey starting in the 1880s in Owen Sound, and local history books often refer to youngsters playing hockey on the ponds and rivers of the region, hockey was not the dominant sport in the region. Baseball, football, lacrosse, sailing and other sports seemed to have equally and, in some cases, more popularity than hockey.

Hockey began an upward trend in popularity about 1903 in Owen Sound. (References are divided whether it was 1903 or 1904). In that year, a junior team from this community took part in the OHA playoffs. The players on the team included Lester Brown, Herb Johnston, Len Loos and others. They reached the finals only to be beaten in a tight battle with Woodstock.

Owen Sound's Lester Brown received accolades from the Toronto newspapers who suggested that he was one of the most outstanding defensemen in junior hockey in this province. The sports writers spoke of his ability to block well and to "lift" the puck.

Lifting the puck was a trick that was practiced by all those who played hockey at the Boyd Street arena.

Writing in 1938, J.J. Gilchrist, who managed the Greys in the period around the First World War, stated, “It used to be considered quite a clever thing to lift the puck clear over the rafters and lights of the old Boyd Street rink. Sometimes a goal would even be scored that way.”

Unfortunately, junior hockey in Owen Sound did not continue on a successful path, after this auspicious debut in the OHA. The problem was a continuity of management of the junior organization. These managerial difficulties caused Owen Sound teams to be at loggerheads with the OHA.

J.J. Gilchrist described the situation as follows: “From year to year, different organizations or managements handled the hockey clubs here. Sometimes these managements were not so bad and sometimes they were just terrible. The result was that Owen Sound was not in the good graces of the OHA executives, more particularly, with that great mastermind of hockey executives, Mr. W.A. Hewitt.” (W.A. Hewitt was the father of legendary broadcaster, Foster Hewitt.)

About 1912, the Owen Sound juniors were once again a dynamic force in provincial hockey circles. A roster which included goaltender Karl Lenahan, Barlow and Ben Legate, Webster Butchart, Ernie Pallister, Earl Hicks, Teddy Creighton, and "Baldy" Bell won the divisional title and went on to the provincial playoffs until they were defeated by Orillia.

Despite the success of the team on the ice, Owen Sound was once again in trouble with the OHA. Fed up with the management of the organization, the players decided to take the initiative to rectify this on-going problem.

In the fall, they called a meeting at the YMCA. At this gathering, J.C. Telford was selected president, with J.J. Gilchrist as vice-president, and Sandy Grant as manager. It was hoped that this executive would, with directives given them at the meeting, be able to rectify the problems that had been incurred by previous management teams.

Shortly after this meeting, another encounter occurred which would prove to be one of paramount importance for junior hockey in Owen Sound for more than a decade.

Webster Butchart approached Gilchrist and asked him if he knew that Bill Hancock was working as a tailor for Jack Herbert. Hancock was a referee with a reputation for honesty, a straight-forward attitude, and great hockey knowledge.

Butchart told Gilchrist that Hancock would be an ideal coach for the junior team. Although there was no money to pay him, Hancock agreed to run the juniors because he loved the sport.

Hancock’s acceptance of the coaching position marked the beginning of an era in Owen Sound junior hockey which would one day lead to this city’s first national hockey title.

The Birth of the Greys

One of Hancock’s first actions was to name the team the Greys. Up until then, the team had been called the Owen Sound hockey team. The first uniforms were gray sweaters and stockings with a red band.

Junior hockey took a hiatus due to the First World War. Intermediate hockey was the only game in town. But hockey was being played on other levels which would create the impetus for the great teams of the 1920s.

A version of "Owen Sound Hockey's Early History" originally appeared in my Local History column in the January 27, 1997 edition of the Owen Sound Sun Times.