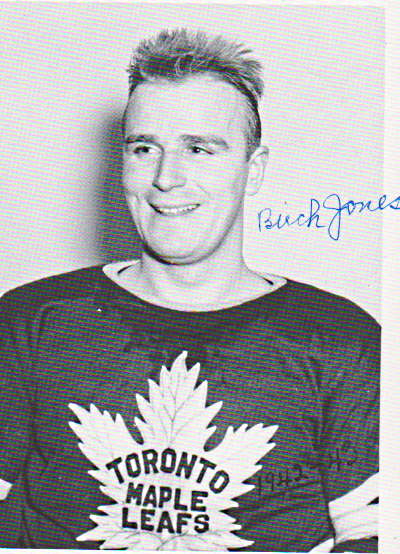 When “Buck” Jones was a youngster, one of his favourite pastimes was hanging out in downtown Owen Sound with his friends hoping to catch a glimpse of his hockey hero, Teddy Graham, a local lad who played with the Chicago Black Hawks in the NHL. Like most Canadian boys, Jones, and his pals, dreamed of playing in the NHL. Little did he realize that one day he would wear the sweater of an NHL club and would be the idol of youngsters like himself! 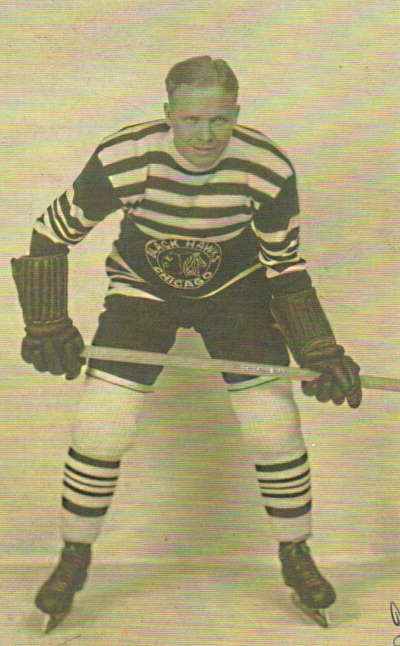 Alvin “Buck” Jones was born in Owen Sound on August 16, 1917. He began playing hockey when, at the age of eight, his father built a rink in the back yard of their home on 6th Ave. West. He later played for Dufferin School in the highly competitive Owen Sound school hockey league. “Buck” recalls that Dufferin’s toughest foe was Victoria Public School. Jones has fond memories of his days playing hockey for his school. In fact, on the walls of his Tampa, Florida home, he has pictures of the 1929-30, 1930-31, and 1931-32 teams, each of which captured the league championship.

“Buck” was an all-round athlete. He played lacrosse and participated in swimming and track and field events. Jones’ abilities came to him naturally, as his father Luther, was an outstanding lacrosse player with the Owen Sound Alexandria’s.

He played hockey for the Owen Sound Crescents before joining the Greys. In order to further his hockey career “Buck” left his home town to play junior hockey in Barrie during the 1936-37 season. But this move does not seem so significant when one considers the trip that he made on the next leg of his hockey odyssey. The 1937-38 season found the youngster from Owen Sound playing hockey in England!

He signed a contract to play with the Harringay Greyhounds of the English Senior League. That season he was selected to play on an all-star team which was touring Europe. One of the main stops on this hockey junket was a tournament in Germany where Adolf Hitler was at the pinnacle of power. To this day, “Buck” remembers walking the streets of that country and hearing Hitler’s speeches booming from loudspeakers which were located on every street corner.

After this season of touring and playing hockey in Europe, Jones returned to Canada to sign a contract to play for the Detroit Red Wings. He had taken a major step towards fulfilling the dream of many Canadian boys to play in the National Hockey League!  His attendance at his first professional training camp in October 1938 caused his home town newspaper, the Owen Sound Sun Times, in its October 25, 1938 edition to trumpet the exploits of the local boy.

“Buck” Jones has just made the jump to pro hockey and is starting what will in all probability prove a long and brilliant career.”

“Buck” not only made an impression on his Red Wing bosses, but he also impressed another person. During training camp, he and his friend, Collingwood native Eddie Bush, went on a date with two young ladies from Michigan. Two years later, “Buck” and his date from that evening, Anna Kaye, were married.

Jones started the 1938-39 season with Detroit’s farm club, the Pittsburgh Hornets. However, during the season, Detroit sent defenseman “Black Jack” Stewart to Pittsburgh and called “Buck” to replace him on the Red Wing blueline. He remained in the Motor City for the rest of the season and played in the playoffs.

He split the next season 1939-40, between Detroit and the Indianapolis Capitals of AHL. “Buck” played the entire 1941-42 season with the Capitals. He started the 1942-43 season in Detroit, but after 21 NHL games he was traded to the Providence Reds, a minor league affiliate of the Toronto Maple Leafs.

He joined the Maple Leafs near the end of the 1942-43 season and played in the playoffs. His coach in Toronto was former Owen Sounder, “Hap” Day. At the end of the season “Buck” enlisted in the Canadian army and was out of hockey until the end of World War II.

After the war ended, Jones, joined the Tulsa Oilers of the USHL for the 1946-47 season. He played for that Oklahoma team until the 1948-49 season when he signed with the Hershey Bears of the AHL. “Buck” spent two seasons on the Bears’ blueline in front of another Owen Sound hockey product, goaltender, Gord “Red” Henry.

He returned to Tulsa for the 1950-51 season and then moved further west. Jones played for the Tacoma Rockets for two seasons before splitting the 1953-54 season between the Seattle Bombers and the Nelson Maple Leafs of the Western Hockey League. “Buck” played 19 games with the Valleyfield Braves of the Quebec Hockey League in 1954-55 before retiring from hockey.

Alvin “Buck” Jones’ hockey career spanned two decades and two continents. The boy from 6th Ave. West in Owen Sound played in Europe and in many places in North America. He had achieved the dream of most Canadians of playing in the National Hockey League. When his hockey career came to an end he settled in Tampa, Florida to raise his family. But his roots in Owen Sound are very deep. He is an honoured member of the Owen Sound Sports Hall of Fame and to this day when the calendar reads November, he dreams of the days of his youth playing hockey on the ice covered yards, rivers and harbour of his home town!

A version of this article first appeared in my Local Sports History column in the Owen Sound Sun Times in November, 1998.

On a personal note, I would like to thank "Buck" and his wife Anna Kay for welcoming me into their Tampa home.