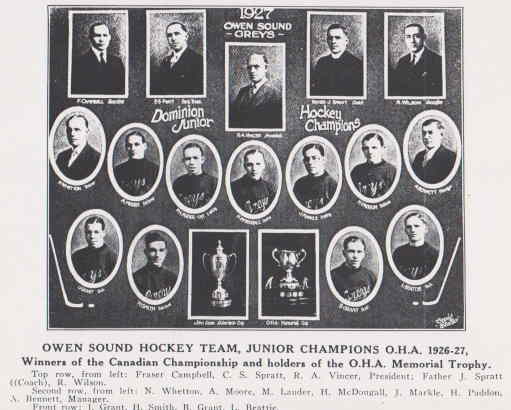 Much has been written about the 1924 Owen Sound Greys who were this community’s first national hockey title. However, if you travel to the Hockey Hall of Fame in Toronto you will see a picture of another team from Owen Sound which won a national junior hockey championship — the 1927 Owen Sound Greys.

In the mid-1920s the Owen Sound Greys were known from the Atlantic to the Pacific as a junior hockey powerhouse. The sentiment in Owen Sound at the time was one of high expectations for each upcoming season for their junior hockey team.

Elmer Dulmage, who was the sports editor of the Owen Sound Sun Times at that time, wrote of this attitude many years later while he was a member of the Canadian Press sports writers corps in Toronto.

"Believe me, Owen Sound took the broad view in those days. It was national championship or nothing. The OHA title was incidental."

In the fall of 1926 things looked bleak for the Greys to remain a powerhouse in junior hockey circles.

Just before the season was to begin, a miracle occurred. A priest came to town with the unlikely name of Father Jack Spratt.

Spratt had been a star hockey player in his student days at St. Michael's College. Being ineligible to play, he would have to use his talents from behind the bench as the new coach of the Greys rather than on the ice as a player.

The team he had inherited had four forwards, a promising young goaltender, but no defense.

The forward line consisted of “Shrimp” McDougall at centre, with Marty Lauder on left wing and Jack Markle on the right flank. The fourth forward was big Hillis Paddon. In goal was a youngster named Benny Grant.

The defense had been the foundation of the previous Greys' teams and, to be successful, Spratt would have to find a solid defensive corps. He made a decision which must have had many Greys' fans shaking their heads at the time, wondering about his coaching abilities.

Paddon was moved from forward to defense, and his partner was a gangling young fellow named “Buck” Moore.

Dulmage described the 1926-27 Greys defense: "It was pretty awful for a while. Paddon was a good poke-checker, but he couldn't bump the oncoming puck-carriers. Big “Buck” aimed at 'em but his aim wasn't so hot."

The Greys started the season slowly, but Spratt took this collection of players and honed them into a championship team. The forward line could skate fast, and it seemed, forever.

They all possessed hard shots but, most importantly, the coach taught them how to backcheck. This was a necessity as it took the defensemen a while to learn to play their position.

Both Paddon and Moore were better than average skaters. As they became more comfortable in their end of the rink they began to think offensively.

Because the forwards were so deft at backchecking, Paddon and Moore began to lead more and more rushes into the opposition end. By the end of the season they were scoring more goals then they were allowing the opposition.

Although the team had two substitutes, Les Beattie and Jack Grant, they seldom saw action, especially in important games. The starting players were conditioned by their coach to be able to play 60 minutes a game.

Dulmage described how the coach turned the players into a top team.

"Father Spratt used to go out on the ice at the old Riverside arena and show'em how. He bumped Paddon, flattened Moore, checked Lauder to death, stole the puck from McDougall and taught Markle how to lay in that low, hard shot to the corner."

Spratt's techniques seemed to have worked. That season the Greys won 19, tied three and lost only four games.

In the playoffs they eliminated Meaford in two games by identical 9-1 scores. Next, they disposed of Kitchener and Newmarket.

However, the series with Iroquois Falls proved to be the biggest test for Spratt and his players. The northern team won the first of the two-game total goal series 4-1.

Even the local faithful were uncertain a three goal deficit could be surmounted. But the wily coach spurred his team on and, led by Lauder's four goals and shutout goaltending from Grant, the Greys won 5-0.

After such a comeback the Port Arthur West Ends were no match for the Greys in the Canadian final. Owen Sound hockey fans had witnessed the coaching prowess of Father Jack Spratt as he developed one of the most unlikely hockey teams into Canadian champions.

A version of "1927 Owen Sound Greys: An Unlikely Canadian National Hockey Champion," originally appeared in my Local History column in the January 6, 1997 edition of the Owen Sound Sun Times.