My book publishing career was a natural extension from my history articles that I had researched, written, and published with various newspapers and magazines. The topics that I have researched written about cover a broad range of subjects from sports history, to Georgian Bay history, to sports card collecting and much more.

As an Amazon Associate I earn from qualifying purchases.

Journey Through Owen Sound’s Hockey History is a trip through Owen Sound’s rich hockey heritage. The journey begins in 1888 and continues to 2021. Along the way, significant events such as the creation of the Greys; two Memorial Cup victories; the building of the new arena; the Allan Cup championship; and the Platers/Attack franchise with all be detailed. 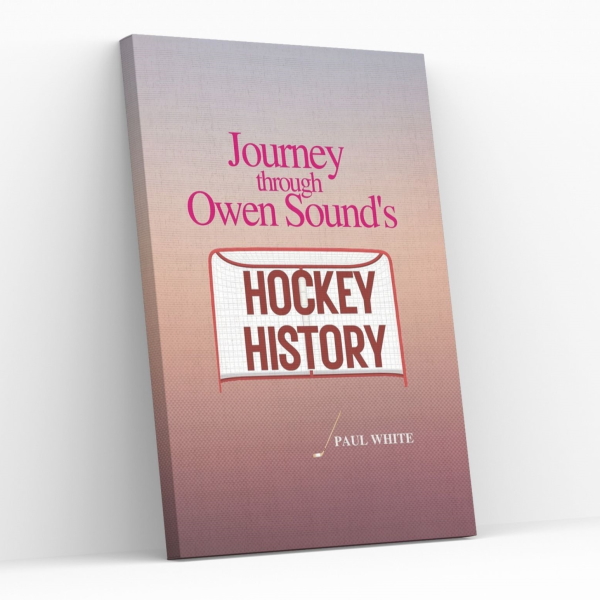 Journey Through Owen Sound’s Hockey History will also celebrate the careers of players who have brought recognition, not only for themselves, but also their hockey hometown. You will read biographical sketches of more than 50 of these local hockey heroes. They include, but are not limited to, Hockey Hall of Fame legend Harry Lumley, “Butch” Keeling, Ted Graham, Benny Grant, Pat McReavy, Tommy Burlington, Jack Lynch, Dan Snyder, Kirk Maltby, Curtis Sanford, and Jordan Binnington.

My recent book publishing effort is Hockey's Royal Family: The Conachers (2015) which details the lives of members of one family, three of whom are honoured members of the Hockey Hall of Fame.

Lionel, Charlie and Roy Conacher are the only three brothers to be enshrined as players in the Hockey Hall of Fame.

Lionel is also a member of several Halls of Fame in many different sports. He was honoured as Canada’s Athlete of the First Half Century of the twentieth century.

Charlie led the NHL in goal scoring on several occasions and was member of the famous “Kid Line” (with Joe Primeau and “Busher” Jackson) which skated with the Toronto Maple Leafs in the 1930s.

Roy Conacher, the third Conacher to be inducted in the Hockey Hall of Fame, led the NHL in scoring in his rookie season with the Boston Bruins. After serving in the Second World War, Roy skated with Boston, Detroit and Chicago, where he captured another scoring title.

Other members of Hockey’s Royal Family represented in this book include Roy’s twin brother Bert, who by all accounts would have made the NHL as a star defenseman had it not been for an eye injury which left him blind in one eye.

Lionel’s son Brian, who skated on Toronto’s last Stanley Cup championship team, Charlie’s son Pete who skated with Chicago, New York and Toronto, and their cousin Murray Henderson who toiled on the blueline of the Bruins are the other featured in Hockey's Royal Family: The Conachers.

The next book publishing effort on my agenda was Owen Sound: The Port City published in 2000 by Natural Heritage Press (now owned by Dundurn Press).

This book starts with the October 1840 meeting of surveyor Charles Ranking and land agent John Telfer in a clearing where the current Owen Sound City Hall now sits.

A brief history of the Native Peoples of the area is the focus of the first chapter. Owen Sound: The Port City then details the growth of the small clearing in the Bruce Peninsula wilderness to a bustling Great Lakes shipping and fishing port. Topics such as Owen Sound’s reputation as the “Corkscrew Town”, the smallest community in the world to host a United States Trade Consulate; and many other interesting people, events and stories.

Shooting For The Moon: The Bill Beagan Story
Foreword by Bobby Orr

Shooting for the Moon: The Bill Beagan Story (2011) details the improbable life of a high school dropout who rose to the very heights of the world of hockey.

Sixteen-year-old Bill Beagan left school and his home in Parry Sound Ontario to join the Canadian Army apprentice program in the mid-1950s.

By the mid-1960s he had received his high school diploma, served in a Middle East peace-keeping detail, and been stationed in the American Mid-West with the Canadian military contingent of NORAD.

While still in the Armed Forces, Beagan refereed college hockey in the United States. He was noticed by NHL referee scouting and with the expansion of the NHL Bill became an NHL linesman. (He worked the lines in the tragic game which saw Bill Masterton become the only player to ever die on the ice in an NHL game.)

After a season on the ice with the NHL, Clarence Campbell, the league president recommended Beagan for the position of Commissioner of the IHL. During the next three decades, Bill served as the commissioner of four different hockey leagues and also co-owned a minor league hockey team.

Shooting For The Moon: The Bill Beagan Story is a great book for anyone who wants to learn about the power of positive thinking, and how to create a career in the world of hockey.

My first book publishing effort was entitled The Hockey Scrapbook: Hockey Memories of the Bruce County & Owen Sound Regions. I researched and wrote it for the Bruce County Museum & Archives, who published it in conjunction with a major exhibit, called Hockey Dreams at that heritage facility in 1997.

The Hockey Scrapbook: Hockey Memories of the Bruce County & Owen Sound Regions has a brief section outlining interesting moments in hockey history in that region on Ontario. There are some interesting stories about early women’s hockey, rivalries, and unique events.

The Hockey Scrapbook is out of print now but can be found on the Amazon website.

Featured centremen in this book include Detroit Red Wing legends Sid Abel, and my

East Coast NHLers:
The stories of the lives and careers of players from the Maritimes and Newfoundland

One of my favorite chapters details the life of Willie O’Ree the pioneering legend who broke the color barrier in the National Hockey League and in 2018 became an honoured member of the Hockey Hall of Fame.


More Of My Published Books