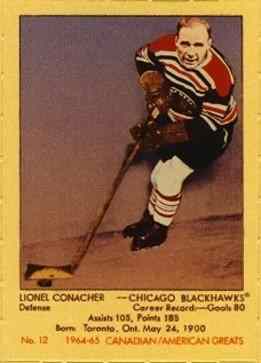 Lionel was honoured as Canada's Athlete of the Half-Century (1901-1950). His exploits in professional hockey and football earned him “Honoured Member” status in both the Hockey Hall of Fame and the Canadian Football Hall of Fame. As if starring in two sports were not enough, Lionel is also a member of the Lacrosse Hall of Fame.

What Other Sports Did Lionel Conacher Excel At Playing?

He also played minor professional baseball and competed in track and field events as well as swimming competitions. Lionel Conacher held the title of Canadian Light Heavy-Weight Boxing Champion! For all of his sporting successes, Lionel is a member of the Canadian Sports Hall of Fame.

Determined to advance both his economic and social position, Lionel enrolled in Duquesne University, while skating with the Pittsburgh Pirates of the NHL in the 1920s. After his sporting career was complete, Lionel entered the world of Canadian politics, first as a Liberal backbencher in the Ontario Legislature and later as a member of the Canadian Parliament in the Mackenzie King government.

Younger brother Charlie Conacher holds a place of honour in the storied history of the Toronto Maple Leafs. Damien Cox writes that Charlie was “arguably the most dashing player to ever play for the Leafs.”
Charlie's name was first etched into the Maple Leaf history books when he scored the first goal by a Toronto player in the first NHL game played in Maple Leaf Gardens. 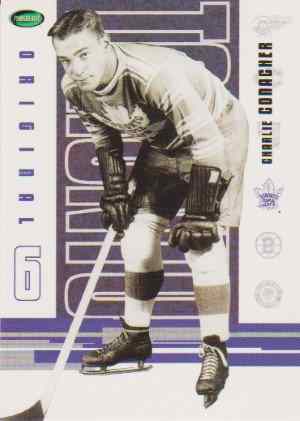 Called “The Big Bomber”, the 6'2”, 200 pound Conacher was known as a fearless hockey player willing to use his size and strength to create scoring opportunities for himself and his team mates. His scoring prowess was accentuated by a powerful shot which instilled fear in the league's goaltenders.

It is quite normal for ordinary sports fans to worship their heroes by wearing their numbered jersey to proclaim their respect and adoration. But it is ironic, if not unusual, for another legendary athlete to go to that extreme. But that is exactly what happened with “Teeder” Kennedy.

That fabled Toronto Maple Leaf player admired Charlie Conacher so much that not only did he wear Conacher's jersey number throughout his youth. When Kennedy signed with Toronto he longed to wear the #9 Leaf jersey like his hero before him. When it became available none-other than Charlie Conacher, himself, presented the #9 jersey to an awestruck Kennedy at centre ice in Maple Leaf Gardens.

What Did Charlie Do After Retiring As A Player?

After Charlie retired as a hockey player, he put his considerable hockey skills and knowledge to work as a coach. He worked behind the bench of the Oshawa Generals of the Ontario Hockey Association, beginning in the 1942-43 hockey season, until the end of the 1946-47 season. In 1944 Conacher led the Generals to the ultimate success in Canadian junior hockey when they captured the Memorial Cup.

After a successful coaching stint in the OHA, Charlie moved on to the NHL accepting a coaching position for three seasons with the Chicago Black Hawks.
Charlie Conacher is enshrined as an “Honoured Member” in both the Hockey Hall of Fame and the Canadian Sports Hall of Fame. 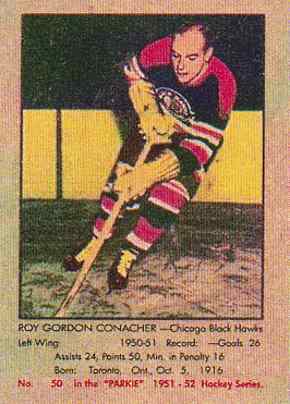 NOTE: Roy's twin brother Bert would probably have also played in the NHL except that he suffered an eye injury playing hockey

and due to the vision-restrictions of the NHL he was restricted to a career in amateur hockey.

First Family Of Sports In Canada

The sporting successes of the Conachers goes beyond these three brothers.

Lionel, Charlie and Roy grew up in what could best be described as poverty conditions. But, through sporting endeavours they not only raised their own social and economic status, but insured that their children could further whatever career aspirations that they might have.

Brian Conacher quoting his father Lionel wrote
“We'll (Lionel, Charlie and Roy) take the cuts and bruises so our kids can get an education.”
Lionel’s son Lionel Jr. played football in the Canadian Football League with the Montreal Alouettes. His youngest son, Brian played in the NHL as a member of the Toronto Maple Leafs when they captured their most 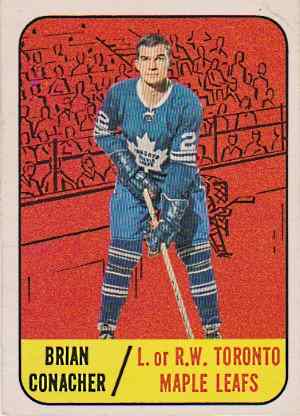 recent Stanley Cup in 1967. Brian also earned a reputation in international hockey playing for Father David Bauer's Team Canada in the World Championships and the Olympics as well as a colour analyst and commentator working alongside Foster Hewitt broadcasting the legendary 1972 Canada-Russia Super Series.

Pete Conacher's hockey achievements were recognized when he was selected to be a member of the Bobby Orr Hall of Fame in Parry Sound Ontario.

Murray Henderson, the son of the eldest of the Conacher siblings, Dolly Conacher Henderson, a first cousin of Brian and Pete Conacher, played in the NHL skating with the Boston Bruins for seven seasons.

The impact of the Conacher family still echoes throughout the hockey community. The extent of this phenomenon was illustrated when the Ottawa Senators traded for a young hockey player named Cory Conacher. The Hockey News, the much-revered journal of everything pertaining to the sport of hockey, dispatched one of their senior writers to research the Conacher family tree to see if this youngster was related to Lionel, Charlie and the rest of the famous hockey-playing clan.

You can read more about Hockey’s Royal Family: the Conachers in my book.

More Of My Published Books