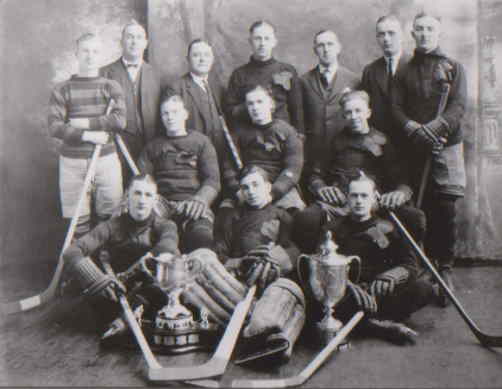 Defenseman Ted Graham left the Greys after their championship season and joined the Stratford Indians in the OHA Senior league. After one season with the Indians Graham joined the London Ravens of the OHA Senior loop for the 1925-26 season. Perhaps one of the reasons that he switched to London was the fact that his teammate from the Greys, Butch Keeling, had signed to play for the Ravens.

After a stellar performance in London, Graham's services were sought by Chicago of the NHL. However, it was not until the 1929-30 season that Graham really became established in the NHL.

Ted Graham retired at the end of the 1937-38 season after spending the year with the New Haven Eagles of the American Hockey League. In all, Ted Graham played 346 games in the NHL, scoring 14 goals and adding 25 assists.

One of the star forwards on the 1924 Greys championship club was Melville "Butch" Keeling. A dynamic goal scorer, Keeling joined the London Ravens of the OHA Senior league for the 1925-26 season.  The next year, London entered a team in the Canadian American Professional League and Keeling played left wing on the number one line for that club.

However, his career in London was short-lived. During that season he was traded to Toronto of the NHL.

Keeling spent the 1938-39 and 1939-40 seasons playing for minor professional teams in Philadelphia and Kansas City before retiring as a player.

However, Keeling's time in the National Hockey League was not over.

He became a referee in that league for many years.

In 1948, a special night was held in Maple Leaf Gardens to honour three hockey heroes from Owen Sound. That night the Leafs were hosting the Red Wings and the Owen Sounders who were honoured were the Red Wings goalie Harry Lumley, the Leafs' coach Hap Day, and the referee for the game "Butch" Keeling.

The regular goalie for the 1924 Greys was Hedley Smith. However, the backup netminder was a youngster named Benny Grant.

Benny followed Keeling and Graham to London after he graduated from junior hockey and after the 1927-28 season he signed to play for Toronto in the NHL In those days teams carried only one goaltender, but Conn Smythe, the Toronto owner, refused to part with Benny.

Instead he loaned Grant to various minor league teams to keep him at the top of his game in case the Leafs were in need of his services. Consequently, Benny Grant played for many different teams during the course of his career.

Benny Grant retired at the end of the 1941-42 season. But one year later he signed to play for the Toronto Maple Leafs in the 1943-44 season. After that year he retired again and returned to Owen Sound.

These are but three of the many players from this region who have played professional hockey, and helped the Owen Sound/Grey-Bruce region gain recognition as a hockey hotbed.

A version of "1920s Owen Sound Hockey Stars NHL-Bound" originally appeared in my Local History column in the October 15, 1999 edition of the Owen Sound Sun Times.