Wiarton Ontario, from its earliest days, had aspirations of becoming the dominant port in that region of Georgian Bay. 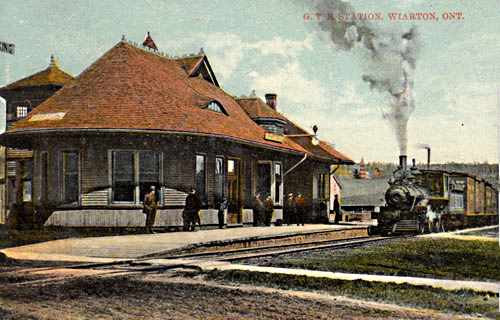 This would prove to be a difficult task considering that it was not even the first community to be settled on Colpoys Bay. After all, its first citizens did not arrive until almost two decades after its main rival, Owen Sound, was first settled.

Although travelers had been coming to the Colpoys Bay area since the arrival of the first Europeans to the Great Lakes region, it was not until 1868 that town lots were offered for sale in what would become the town of Wiarton.

Wiarton Ontario Was Known For Its Excellent Natural Harbour

It seemed to be a natural choice for the location of a port community. Colpoys Bay offered a natural harbour refuge for sailing vessels from storms on the often-tumultuous waters of Georgian Bay. As well, the harbour was located at the portage route across the base of the Bruce Peninsula from Georgian Bay to Lake Huron.

But, Not Enough For An Early Settlement

In the beginning, this portage route provided a shorter, and safer, passage route for travelers wishing to avoid the perils of sailing the channel between Tobermory and Manitoulin Island. However, instead of a community being established earlier at the Wiarton town site, settlements instead sprung up on either shore of Colpoys Bay at Oxenden and the village of Colpoys.

Wiarton was nothing more than a heavily treed rise at the end of Colpoys Bay when James Lennox arrived on November 16, 1856 and built a permanent building, a log shed. This event signaled the beginning of the arrival of settlement.

Department of Indian Affairs Steps In To Aid Development

In order to develop the settlement as a port facility, Wiarton received a grant of $3,000 from the Department of Indian Affairs to be used towards the construction of a wharf. When the wharf was completed, E.C. Jones erected a storehouse to provide a market centre for the produce of the area farmers.

By 1868, the steamer Hero, sailing out of Collingwood, was making two trips a week to the small settlement.

In 1869, connections with the rest of the province were further improved when the steamer Champion owned by John Hodgins began making daily trips between Wiarton and Owen Sound.

The Community Of Wiarton Ontario Grows

During the 1860s the community welcomed a druggist by the name of Patterson, and Thomas Gilpin opened the town’s first sawmill. Of course, it would not be long before there were many sawmills around the area.

By 1870, the community’s population had increased to about 200 inhabitants. However, growth continued at a rapid pace and in the next six years, Wiarton’s population doubled to more than 400. During this expansionary time frame, a grist and planning mill were opened as well as another sawmill. D.G. Millar opened a tannery. As well, another connection with the outside world was created with the opening of a telegraph office.

During the sailing season, there was a daily steamer service sailing between Owen Sound and Wiarton. In the summer, a stagecoach made a once a week trek over the rugged terrain that ostensibly passed as a road. In the winter, when sailing season concluded, the stagecoach increased service to Owen Sound making three trips a week.

Today modern roads link Wiarton Ontario with the rest of the Bruce Peninsula and Owen Sound. The sailing season is a busy time at this Colpoy’s Bay port of call. This historic community is a great place to visit on your way up the Bruce Peninsula.

Park Head  Grand Trunk Railway in Park Head Ontario was an important railway depot on the Bruce Peninsula when in 1894 the first train chugged through Park Head.