A lumber hooker named the W. L. Wetmore with a full load of lumber was built in 1871. 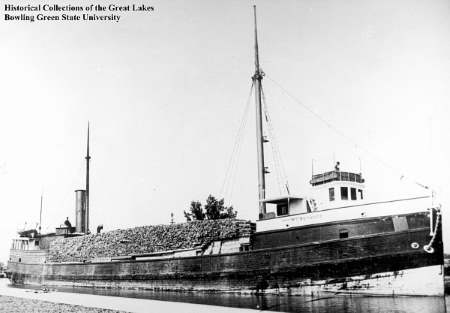 Lumber hookers and tugs were an important innovation to improve the transportation of lumber on Georgian Bay.  The importance of the lumbering trade in the Georgian Bay region created a need to develop new technologies that were unique to the timber industry.

Along with the many fleets of tugs which serviced the Georgian Bay maritime economy, the lumber hookers were designed to transport large amounts of forest products from remote sawmill locations to larger market areas for either immediate use or trans-shipment to points further into the interior of North America.

The hookers were designed in a fashion similar to the bulk freighters which were beginning to appear on the Great Lakes. However, they were shorter and stubbier with raised after and fore-decks, with the pilot house at the front and the crew quarters in the aft section. The midsection was clear in order to carry large quantities of sawn lumber and logs.

These powerful vessels were also able to tow in their wake barges and rafts carrying more timber. It was not an uncommon sight to see a lumber hooker laden with saw logs towing one or more schooners also loaded to capacity with saw-logs.

These floating lumber trains were also susceptible to the tyranny of the weather and sailing conditions of Georgian Bay.

On Nov. 29, 1901, the lumber hooker "W.L. Wetmore", with the schooners "Brunette" and "James C. King" in tow, was entering Devil Island Channel. With heavy seas running out of the north-west accompanied by blinding snow, the "W.L. Wetmore" met its fate when it ran aground on Russel Reef off Tobermory.

Diving The Wreck Of The Wetmore (1901), Tobermory, Canada

Tugs and the Forest Industry

Tugs were also important to the transportation of forest products. Fleets of tugs were maintained in Georgian Bay solely for the movement of timber. One of the most widely known tugs was the "Wahnapitae". This craft was built by the Beck Lumber Company (other ship-building stories) in the winter of 1904-05. It was a two-masted, 191-ton vessel with a 300-horsepower engine. The "Wahnapitae" had a crew of nine men. In 1920 its length was increased from 90 to 120 feet. This powerful craft could tow booms containing 180,000 logs which was enough to keep sawn-mills operating non-stop for a month. 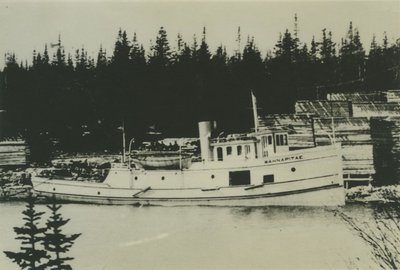 When the Beck Company's timber limits on the north shore became exhausted, the “Wahnapitae” was sold in 1929 to the Keenan Towing Company in Owen Sound. It towed barges, booms and pulpwood to the Keenan wooden ware dock until it was sold in 1937 to the McFadden Lumber Company of Blind River.

A tug towing a large raft of logs was vulnerable to the often-dangerous waters of Georgian Bay. In order to reduce the danger to the tugs and their crews, innovations were made to the manner in which these rafts were transported. A steam deck-winch was mounted at the stern of the tug. From this winch, a steel towing cable was extended to the raft. This cable maintained a distance of 600-700 feet between the raft and the tug. This distance was required to reduce the impact of the backwash created by the tug's propeller and therefore make the handling of the tug and its raft safer and more manageable for the crew.

As can be imagined, the stress created on the cable where it was hooked to the raft was intense. To reduce the possibility of the cable snapping, its connecting link with the raft, the point at which it was fastened to the raft was reinforced by bolting two oak blocks at the front of the raft. A hole was drilled through these blocks and the raft. A heavy steel chain was then looped through the hole and then connected to the end of the cable.

This connecting device was so strong that it was reported that it never gave out, even in a storm. An added feature of this system was that if a storm became so violent that the tug and its crew were in danger, the tug could separate itself from the raft simply by letting the steel cable run off the winch. Then, after the storm abated, the tug could return and find the raft, locate the towing cable, reattach it to the winch and continue on to its destination.

The lumber hookers and tugs that were so vital to the economy of the Georgian Bay area have long since disappeared. Their role in the maritime history of the region is one that is admired by anyone who has studied the development of the Georgian Bay region. 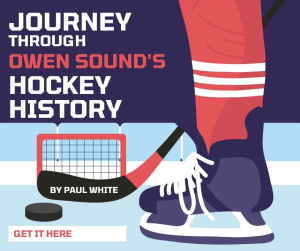