As a historian who has written extensively about the Georgian Bay region and Owen Sound in particular, Owen Sound Harbour – A Photographic History, by Robert A. Cotton is a book that interests my historiographical curiosity. 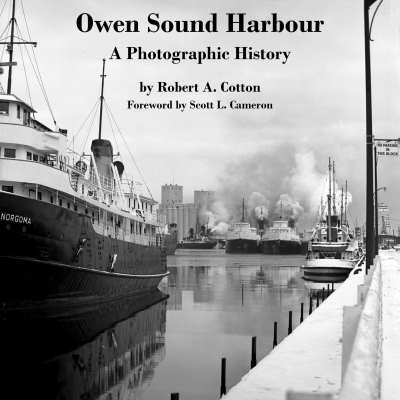 Historians have barely touched the rich heritage of the Georgian Bay region. And, most of the limited number of publications about the history of the area have depended almost entirely upon words to tell the story of their research into their subject.

Why is a book about Owen Sound harbour important?

From the 1880s through to the 1950s, Owen Sound was a primary destination for shipping traffic on the upper Great Lakes. Consequently, Cotton’s use of pictures to describe the vessels that sailed to, and from, this important Georgian Bay port provides not only a unique perspective on maritime commerce in the region, but is also a valuable contribution to the historiography of Georgian Bay and the study of Great Lakes maritime history.

Owen Sound Harbour – A Photographic History by Robert A. Cotton is a visual record, 117 black & white photographs, of the schooners, steamers and lake boats that came through the harbour over the years and the role they and the harbour played in the development of shipping on the Great Lakes. Each image is accompanied with a story that highlights some aspect of the boat’s history and provides some historical context.

The book covers the years 1867, with the building of the Francis Smith, to the 1960s when the vessels of the Hindman Transportation company fleet moored in the harbour.

The Frances Smith (launched April 30, 1867) made daily runs from Owen Sound to Collingwood carrying passengers, cargo and most importantly, mail. She departed from Boyd’s Wharf at 7 a.m. and after stopping at Cape Rich and Meaford, arrived in Collingwood in time for passengers to board afternoon train to Toronto. 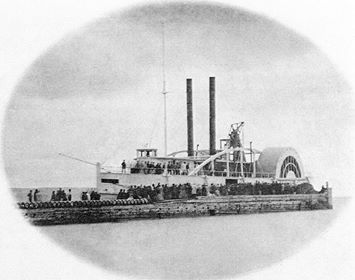 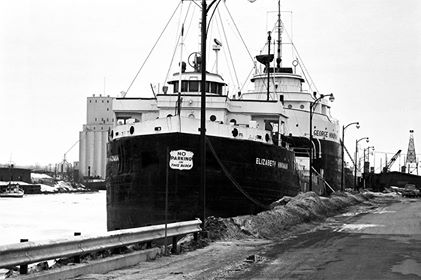 Captain Hindman found the Risacua in the Caribbean and renamed her the George Hindman (2) in 1953, she became the Elizabeth Hindman in 1962 when the larger George Hindman (3), seen docked in behind her, was purchased. After 40 years in Owen Sound the company closed at the end of the 1977 season.

These ships, with home ports scattered around the Great Lakes, docked in Owen Sound harbour during their travels. Their history tells the story of the Canadian frontier as it pushed westward beyond Georgian Bay to North Western Ontario, the Canadian prairies and the American mid-west. It also tells the story of Owen Sound’s role in that endeavour through the development of the harbour and rail facilities, of the entrepreneurs who, looking westward, financed the building of these ships, of the shipbuilders who often took their own financial risks to get the ships built and of the captains and crews who risked their lives on a daily basis navigating the treacherous waters of the upper Great Lakes.

The majority of the photographs are from the John James Collection held in Owen Sound by Grey Bruce Image Archives (GBIA). A commercial and portrait photographer in Owen Sound from 1905 until his death in 1956, James photographed well over 100 vessels and harbour scenes. The photographs have been carefully digitized from glass and film-based negatives and are some of the only records of these ships. A lovely collector’s edition for anyone interested in local history and navigation on the Great Lakes.

Born in Guelph in 1951, Robert A. Cotton moved to Owen Sound in 1964. He received an undergraduate degree in history in 1976 at the University of Guelph where he was introduced to art, art history and photography. He studied photography at Fanshawe College and graduated from the Canadore College Journalism program in 1989. Robert has pursued careers as a photographer, museum curator and journalist. The County of Grey-Owen Sound Museum (Grey Roots) employed him as a photographer and restoration technologist and eventually he became the curator of the Billy Bishop Museum in Owen Sound. He has also worked as a photographer/writer for several newspapers. As curator of Grey Bruce Image Archives (GBIA) for the past 15 years, Robert has contributed to the publication of three pictorial history books of Owen Sound.

Where Can I Get this Great Book?

Owen Sound Harbour – A Photographic History can be ordered online at http://newpressbooks.com/shop/  for $35 plus GST and shipping

and is available at the following outlets for $35 plus GST