The Grand Trunk Railway In Park Head, Ontario became an important railway depot on the Bruce Peninsula after August 29, 1894. 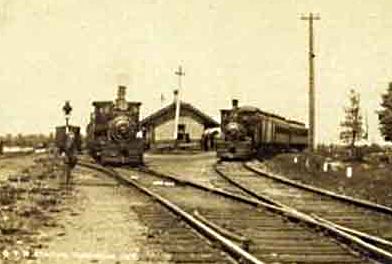 On that date, the first regularly scheduled train from the Grand Trunk line chugged into Owen Sound via Park Head.

It was also an important event for the citizens of another Bruce Peninsula community.

On that date Park Head residents could now travel by rail to either Owen Sound or Wiarton to reach the shores of Georgian Bay.

Prior to that date Grand Trunk railway traffic could only travel to Wiarton.

In 1880 the Grand Trunk Railway leased the Stratford and Huron Rail Line and the next year commenced building a route between Harriston and Wiarton.

Area residents greeted with jubilation the arrival of the construction crew to the area.

A party was held, and the workers were treated royally. Two area hotels, the Forest and the Neebing, made contributions of nine kegs of ale to the party.

That must have ensured that “a good time was held by all!”

Although a work train made its way to Wiarton in December of 1881, it was not until July 1, 1882 that regular rail service began.

From this point in time, onwards, the residents of the interior of the Bruce Peninsula could travel to the shores of Georgian Bay in relative comfort compared to their previous travel experience of a rough horse and buggy ride, or an arduous trek by foot over the pioneer roads.

The building of the line from Park Head to Owen Sound, a decade later, meant that area residents had a choice of destinations, Wiarton or Owen Sound.

When the Grand Trunk Railway In Park Head, Ontario first arrived in town that small community was already a centre of activity for its region.

The first settler, William Simpson, arrived in the area in the fall of 1855 from the Peterborough area.

With the aid of a compass and some settlers from nearby Arran Township, he located what would become Lots 1 and 2, Concession 5, Amabel Township.

After making application for the land he returned to his home near Peterborough.

On April 1, 1856 he arrived in Owen Sound with his wife and young daughter.

Simpson and his family spent the summer with a family in Arran Township until September 1856 when his land title was confirmed.

On September 25, 1856 the Simpson’s moved to their new home in Amabel Township.

The conclusion of the Land Sale marked the beginning of settlement in the area and in 1857 other settlers joined the Simpson family in the area.

Like most early settlers, news from far away friends and family was important.

Because the first settlers in this region lived an isolated life, letters and newspapers from former hometowns and homelands, provided a feeling of warmth on a cold winter night.

Therefore, it was important that there was a postal connection with the outside world.

At the corner of Concession 5 and the County Line there was a large tree with a hole in its trunk.

Anyone wishing to send a letter took it to the tree and left it in the hole.

Whenever anyone was traveling to Owen Sound they would go to the tree and pick up the letters and take them to the post office in that town.

In 1865 Simpson became the first postmaster in the area and the post office was located in his home.

The postal department asked him to give a name to the postal district that he would be serving.

He chose Park Head, the name of his wife’s birthplace in Scotland.

Today as you drive between Alvanley and Hepworth you will pass through the sleepy hamlet of Park Head.

Although it is not a booming centre of commerce anymore, it is rich in history.

I Hope you enjoyed this historical story of the Grand Trunk Railway In Park Head, Ontario.

The information used in this article came from three sources: Owen Sound newspapers, the Wiarton Echo and, most of all, a wonderful book entitled Green Meadows and Golden Sands, The History of Amabel Township.