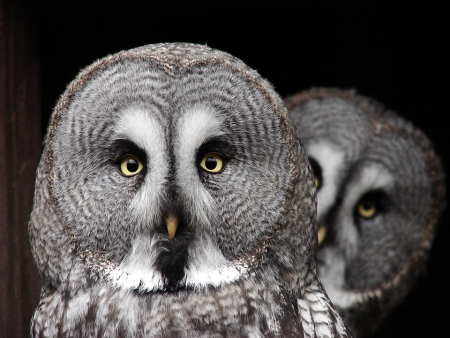 Last January, some majestic visitors landed on the Bruce Peninsula.

Great Grey Owls, normally residents of northern Canada and Europe, made their way to Grey-Bruce in the largest migration in recent memory, according to Bob Gray of the Ministry of Natural Resources.

Unfortunately, the Great Grey Owl has not fared well in this new environment. Mark Wiercinski, of the Bruce Peninsula Bird Observatory, banded 44 owls after they were discovered in this area. But in less than a year there may only be 10 to 20 of these birds left on the peninsula, he said.

The tallest owl in North America, the Great Grey can reach a height of 22 inches. Its wing span is four to five feet, and its weight may vary between 800 grams and 1.5 kilograms. (The smallest bird banded by Wiercinski weighed 844 grams.) It is all grey with some white streaks, no ear tufts, and yellow eyes. 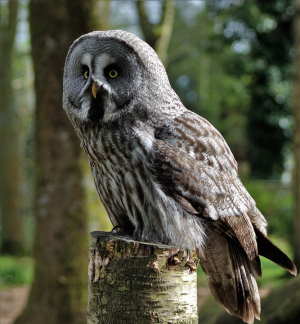 This bird's natural habitat is the northern coniferous forests and bogs. They like to hunt for their prime food of mice and other small rodents in open spaces. Wiercinski said that an associate once saw a great grey with a frog. This is not as unusual as it sounds. Birds who eat small animals are also opportunists and will take whatever is available to sustain themselves.

In the winter, they hear mice burrowing through the snow and swoop down to the point of attack, diving head first into the snow, catching their prey in their beak. Great Greys are equally adept with their talons. During his banding project, in virtually every instance, the owl picked up Wiercinski's bait with its talons.

Wiercinski said one reason these magnificent birds may have come to the Bruce Peninsula is that there was a population explosion of Great Grey Owls in Manitoba two years before the migration.

This may have led to a shortage of food, forcing some of the birds to move on.

So why are they now disappearing from the peninsula?

It is believed that great greys don't like flying over large stretches of water.

These owls tend to fly short distances and make frequent landings. Unlike hawks and eagles they don't soar high in the air, they fly close to the ground. 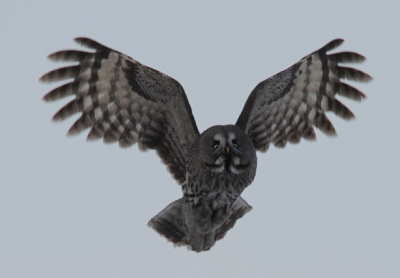 Thus, as they flew northward, the presence of Georgian Bay on the east and Lake Huron on the west squeezed their flight path until they became trapped on the peninsula.

Great Grey Owls that have been sighted on Cove Island appeared to try to fly offshore but soon returned to the island, Wiercinski said. Though it's not known for sure, there's a strong likelihood that they are either unaccustomed or unable to fly for extended periods of time, making a large body of water a formidable barrier.

Therefore, the Great Grey Owl found itself in a new and unfamiliar territory. Why have their numbers dramatically decreased in such a short time? The answer seems simple: humans!

These birds are usually found in areas where there are few, or no humans. The Great Grey Owls can swoop along close to the ground in search of their prey without fear. However, on the Bruce Peninsula, where roads cross both the open and forested areas, traffic is a major hazard. Many motorists have reported hitting these birds, and it's suspected that cars may be the main cause of the death of so many owls.

When asked if there was anything that could be done to help the remaining owls, Wiercinski said that it's usual for 75 per cent of birds who are part of an eruptive migration to fail to survive.

It it not known for certain how many Great Grey Owls came to the Bruce Peninsula, or how many were able to leave. All that is known is that there are probably only 10 to 20 remaining. Cars may have taken their toll on these birds, but there may have also been other factors. No one really knows for sure.

A version of this story originally appeared in my Local History column in the Owen Sound Sun Times in 1998.