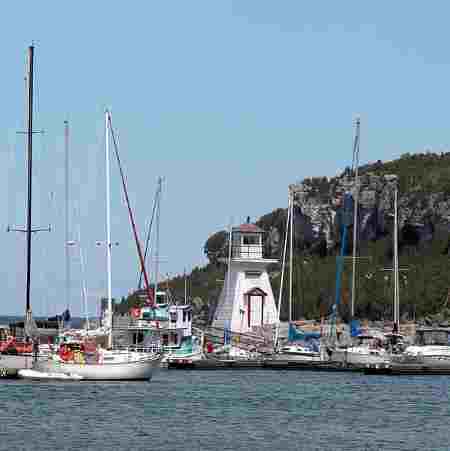 Lion’s Head probably welcomed its first visitors/settlers in the 1860s. But, prior to that, sailors had often sought refuge from the stormy Georgian Bay waters in its well-protected harbour.

Travel was not always so easy, or pleasant, on the Bruce Peninsula in the early days! Many of the first settlements were more easily reached by water than by land.

Today there are many reasons why cottagers choose to build their holiday retreats on the peninsula.

However, the magnificent Georgian Bay sun rises, or the romantic Lake Huron sunsets were not the main reason why early settlers chose to make a life on the Bruce Peninsula.

From early newspaper reports we know that fishermen were visiting Tobermory by the early 1850s.

However, the rest of the Upper Peninsula did not welcome pioneers in any numbers until almost two decades later.

The first settlers usually arrived by boat and took up land close to the shoreline. Consequently, the first areas settled were in bays and inlets along the coastline of the peninsula.

In the1860s settlers arrived on the eastern shores of the Bruce Peninsula.

Isthmus Bay was well known to the early sailors on Georgian Bay.

Not only did it afford a safe haven from rough stormy waters, but it also was recognizable for an image that jutted out of the rocky outcropping which marked Point Hangcliff where it protruded into Georgian Bay on the southern limit of Isthmus Bay.

Centuries of wind, snow and rain carved what many considered to be the image of the head of a lion on the rocky outcropping.

Many sailors, and later the settlers of the area, came to think of the lion as the protector of the waters of Isthmus Bay. Consequently, it was not long after the settlers arrived that the small settlement was re-named Lion’s Head.

In 1875 Lion’s Head boasted the only store in Eastnor Township, and in the same year a post office was opened in the community.

In 1879 Robert Watt built a saw and gristmill in the community. At that time the community had about one hundred citizens, two stores, a black smith shop and a pump factory.

This was a boom time in the community. By 1883, the population had doubled, and the commercial sector boasted five stores and two hotels.

Lion’s Head was a regular port of call for the vessels that supplied the coastal trade on the peninsula.

As well, increased lumbering activity in the area meant that area logs and other wood products were being shipped out of the region to distinations as far as the American mid-west.

In order to facilitate the increased activity in the port a new wharf was built. In 1883, amid expectation of increased shipping traffic the community petitioned the government to dredge the harbour in order to enable larger vessels to call at Lion’s Head.

The government responded to this request and equipment to dredge the harbour arrived the same year.

Today Lion’s Head is a centre of tourism, and the lion’s head still guards the southern entrance to the bay.

However, the same elements that created the image have continued to erode the rocky outcropping. Some claim that the lion has disappeared, but if you look closely, you can still see it watching over mariners who seek refuge in the beautiful Isthmus Bay.

The information used in this story came from many sources. However, the most important was Norman Robertson’s History of the County of Bruce.

This Article originally appeared in my weekly Local History column in the Owen Sound Sun Times.