Wiarton Ontario's first newspaper, the Echo made its debut in 1879. 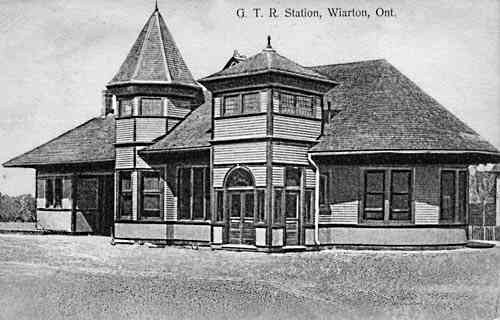 Much can be learned about pioneer life, not only in Wiarton, but also the Bruce Peninsula from the pages of this well-written and interesting journal.

The Echo viewed itself not only as a messenger of the news of the day, but also as a medium to promote the development of the interests of the Bruce Peninsula, and more particularly those of Wiarton.

The Wiarton Ontario's first newspaper editor, George Bingham, in his first editorial on July 4, 1879 stated his rationale for the creation of the newspaper:

“We do not desire to make any apology for its advent, for need hardly say that its endeavoring to supply a want long felt in the Saugeen Indian (Bruce) Peninsula – namely, the establishment of a journal which advocate the local improvements and point out the various requirements of this section the country.”

The Echo’s first editorial urged the building of a railway on the Bruce Peninsula; the construction of new roads; and the improvement of existing roads. These demands made it clear that the editor realized the value of efficient and effective transportation linkages within the immediate hinterland as well as to the more developed areas of the province of Ontario.

Consequently, the early issues of the Echo, Wiarton Ontario's first newspaper, were full of editorials concerning the advantages of building an effective overland system of transportation routes. Therefore, it is not surprising the elation shown by the editor when it was reported in its August 1, 1879 edition that a new road was opening between Dyers Bay and Lion’s Head.

Later in August, the same delight was shown when a story appeared telling readers that “…the 20th Side Road in Eastnor, connecting the Colpoys’ and Lion’s Head road on the east side of the Government Road, on the west side will be open for vehicle traffic about October 1.”

Wiarton interests viewed the building of roads as, not only important to the growth of the Bruce Peninsula, but as essential to the goal of making Wiarton the centre for trade for the entire area. These roads would make it easier for area farmers and other business interests to bring their produce to Wiarton to sell or transship on to other markets. As well, Wiarton merchants would have a larger market for their merchandise.

Consequently, good roads throughout the Bruce Peninsula meant a flourishing economy in Wiarton.

These ambitions did not stop with Wiarton becoming the center of trade and commerce on the Bruce Peninsula. The ultimate aim of the town’s leaders was to compete and surpass Owen Sound as the most important Georgian Bay port in the region.

To achieve this ambitious goal, the business and political leaders realized that they needed a railway connection. A railroad to Wiarton would mean year-round commercial trade, not just an economic base that relied upon the navigation season. Acting as the spokesman for the community, the Echo constantly editorialized the value of a railroad system with its terminus at the head of Colpoy's Bay.

The newspaper claimed that as well as economic growth; improved access to the region would bring more prospective settlers to the Bruce Peninsula.

In order to prove the need for a railroad as a vehicle for economic growth, the Echo illustrated the impact that a railway connection had on Collingwood. The editor pointed out that in 1879, “…there are 15 regular passenger trains arriving and departing” from Collingwood on a weekly basis.

When a vote was to be put to the citizens of the United Townships of Eastnor, Lindsay and St. Edmunds for the purpose of granting $8,000 by way of issuing debentures and a bonus to assist in the build of the Stratford and Huron Railway, the Echo urged all voters to support this proposal.

Consequently, when this bylaw was defeated, the Wiarton Ontario's first newspaper editor was enraged. A July 26, 1879 editorial attacked the narrow-minded outlook from the position that what was good for Wiarton, was therefore good for the rest of the Bruce Peninsula.

Despite various setbacks in the railway campaign, the town finally received some good news. The September 26, 1879 edition of the Echo reported on its front page that on September 22, contracts had been awarded for the construction of the Stratford and Huron Railway from Listowel to Wiarton.

In order to receive the bonuses, set out in the contract, construction went at a furious pace. On November 29, 1881, track-layers reached Wiarton and at 6:00 pm the same day, a locomotive hauling a few flat cars entered the town amid great jubilation. However, regular train service did not begin until the next year on August 1.

As the Wiarton Ontario's first newspaper had predicted the railway had a positive impact on the community. For the next two decades Wiarton's economy grew.

But, a decision by the railway in the 1890s spelled the end of the boom for Wiarton. The railway, now owned by the Grand Trunk Railway, decided to build a spur line from Park Head to Owen Sound. The result of this decision meant that many businesses along the route chose to send their products to Owen Sound rather than Wiarton. In the end, the railroad which had done so much to help Wiarton develop as a centre of trade, contributed very much to the community’s economic downfall and helped Owen Sound continue to dominate the economy of the Bruce Peninsula area.

Wiarton Ontario's first newspaper continues to publish to this day.

This Article originally appeared in my Local History column in the Owen Sound Sun Times.

Towns & Villages: The first Bruce Peninsula towns and villages had a source of water power to run sawmills and a good harbour to ship forestry products to market.

Allenford United Church history details some important information about that community's church but also about one of the founders of this Ontario community.

A Pioneer Community: Driftwood Crossing (now Allenford): at the southern-most part of the Saugeen/Bruce Peninsula was at the midpoint between the Georgian Bay and Lake Huron coasts.

Land Auction in Amabel Township provided the opportunity for settlers to purchase land and begin a new life in Bruce County. On July 18, 1856, a notice signed by R.T. Pennefather, superintendent general the Indian Department, announced the public auction sale of 144,000 acres of land in the new townships of Amabel and Keppel.

Bruce Peninsula Municipal Politics: No matter what the venue, or the issue, seldom is a decision made that suits everyone.

Dyer's Bay Ontario: Began as a lumbering settlement but may also have been one of the earliest points on the Bruce Peninsula to be visited by French explorers.

Elsinore Ontario: In the mid-1850s the first settlers arrived in the area just west of Allenford. However, it was not until 1865 when the North Gravel Road, or Highway 21 as it known today, was built that the village of Elsinore was established.

Hepworth Ontario: The early history of Hepworth is tied to two essential commodities, sawmilling and transportation. How Hepworth got its name is also an interesting story.

Lion's Head remained an important lumbering centre into the twentieth century. Today it is a centre of tourism, and the lion's head still guards the southern entrance to the bay. However, the same elements that created the image have continued to erode the rocky outcropping.

Park Head was an important Grand Trunk Railway depot on the Bruce Peninsula.

Sauble Beach: This popular beach in the 1950s was called Canada's Daytona Beach.

Sauble Beach Ontario is one of the most popular summer resorts in the province of Ontario. It welcomed its first summer visitors in the late 1800s and as continued to grow in popularity since that time.

Stokes Bay welcomed fishermen as their first non-native visitors. Today, if you are a fisherman, you will also probably want to try your luck landing a walleye, lake trout or any of the other game fish that live in the coastal waters of Lake Huron.

Tobermory Ontario has a rich history and, is the northern- most destination point for travellers visiting the world famous Bruce Peninsula.

Tobermory Ontario Tourism is focused on Fathom Five National Marine Park, Bruce Peninsula National Park, and, shipwreck diving which has become so popular that tourism has become an important part of that community's economy.

Tobermory Pioneers were first the fishermen who came to reap the rewards of the fishing-rich waters at the top of the peninsula.

Wiarton Ontario was known for its excellent natural harbour. It seemed to be a natural choice for the location of a port community. Colpoys Bay offered a natural harbour refuge for sailing vessels from storms on the often-tumultuous waters of Georgian Bay. As well, the harbour was located at the portage route across the base of the Bruce ...

Wiarton had Ambitions to Succeed but while success brought them a railroad and other ventures, one attempt did not have a sweet ending for many in the town.

Wiarton News: 1897 Town Council Report. By 1897 Wiarton was an established community and was experiencing some of the growing pains consistent with a community which was constantly expanding its physical borders. A November 1897 Wiarton council meeting reveals some the problems which that community was facing.

Wiarton Beet Industry: Wiarton's Sweet Enterprise Turns Sour! In their attempts to diversify Wiarton's economic base, a dramatic new industry was incorporated in 1896. Originally called the Owen Sound Sugar Manufacturing Company, the Wiarton Beet Sugar Manufacturing Company looked like it would have a large impact on the economy of the Wiarton area.

Wiarton Ontario's First Newspaper: The Echo viewed itself not only as a messenger of the news of the day, but also as a medium to promote the development of the interests of the Bruce Peninsula, and more particularly those of Wiarton.