The late 19th century marked the beginning of the growth of tourism.

Once only the very wealthy could afford to take time away from work.

Now, more and more members of society could partake in leisure activities.

In the 1890s, John McLauchlan opened McLauchlan Park, or as it was also called, The Pleasure Grounds, at Balmy Beach just north of Owen Sound on Georgian Bay.

Here visitors could fish, swim, lawn bowl, or just idle the time away on a warm summer day.

The only transportation link to the park was by water.

Visitors boarded the Mazeppa at Owen Sound and took a short, but scenic boat ride, to this pioneer amusement park.

McLauchlan probably saw the economic potential from the growth of tourism in other parts of the province, especially in the Muskokas.

He realized that the existing park needed accommodations to attract visitors from more distant points.

In 1901, he formed the Georgian Bay Summer Park and Resort Company. Like other projects in Owen Sound's past, this enterprise enjoyed the economic support and encouragement of the business community of the region.

The board of directors was a virtual "who's who" of Owen Sound's economic elite; including names such as Eaton, Butchart, Harrison, Hay, Creasor and many others.

Given the support of such high-profile citizens, many Owen Sounders bought into the project either monetarily or with moral support.

The owners had ambitions to make what was to be called King's Royal Park one of Ontario's premier tourist attractions.

The hotel was magnificent. It contained more than 100 rooms.

The Spanish style exterior was painted white with a red tiled roof.

Passenger ships stopped at the King's Royal docks, bringing visitors from the Midwest United States and the southern states as well as tourists from across Canada. 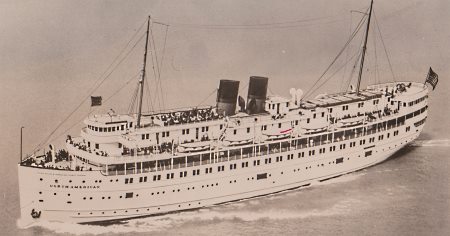 The North American and her sister ship the South American were two of the passenger ships that called at King's Royal Park.

Two vessels that visited this Georgian Bay resort on many occasions were the North American and her sister ship, the South American, often called the Queen of the Great Lakes. (After the demise of King's Royal Park, these two vessels continued to visit many ports of call on Georgian Bay including Owen Sound.)

While natural scenic delights, golf, tennis, lawn bowling and other outdoor activities were attractive, the hotel itself drew travelers.

Private dining rooms, billiard rooms, private baths and writing and sitting rooms for the ladies, illustrate an opulent splendor almost unheard of in this, or any other, Ontario hinterland region.

There was dining and dancing in the hotel and a professional theatrical group performed in a location behind the main building.

It's 1902 debut found the hotel full to capacity and dreams of future growth and prosperity for the area as a tourist mecca were held by all.

Through foresight, ambition and determination, Owen Sound looked to be on the verge of benefiting from a new economic adventure.

Unfortunately, King's Royal Park was not to be the vehicle for economic diversification through tourism for the region.

Its existence as a tourist destination would be short-lived.

The community of Owen Sound supported the project wholeheartedly, but other factors would lead to its demise and destruction.

The syndicate behind the project spent $100,000 to create this oasis of pleasure and entertainment.

Through drive and determination, the hotel had been completed in one year.

Initially, the tourists flocked to the Balmy Beach resort, but gradually, the smartly-dressed white uniformed 112-member staff began to outnumber the guests.

By the beginning of the First World War, registration was less than 10 per cent of capacity.

What caused the demise of King's Royal Park?

One can only speculate.

Some suggest the impact of the First World War was important.

Others are of the opinion that the Muskoka region was more favorable and more in style with the wants of would-be tourists from Toronto and other parts of southern Ontario.

This may indeed be the real reason. The guest register of the hotel reveals many American' names and addresses.

However, not enough American travelers came to the shores of Georgian Bay to sustain such a large enterprise.

This historic vacations, King's Royal Park may not have been a long-term success, but it is of the spirit of cooperation and entrepreneurial drive which helped create the community of Owen Sound!