When taking a flowerpot island boat trip as the early settlers did, beautifully, weather carved formations called flowerpots are not the only amazing feature you will see. 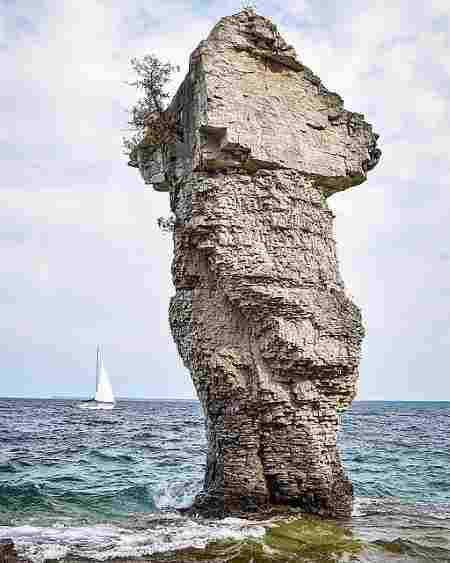 Flowerpot Islands Flowerpots at the Tip of the Bruce Peninsula

A Flowerpot Island boat trip takes you to one of the many Georgian Bay islands that dot the landscape of the waters around Tobermory, at the tip of the Bruce Peninsula. One island features not only unique landforms and vegetation, but also a mysterious indigenous Romeo and Juliet tale of romance.

A Flowerpot Island boat trip passes over a part of Georgian Bay that is 600 feet deep. With the winds whipping up the surf, and the boat rocking with each swell, we have a renewed regard for the sailors of the vessels that plied these waters centuries ago, and understand, perhaps, why the floor of this region of Georgian Bay is the home to so many shipwrecks!

Arriving at Flowerpot Island, one is overcome by the beauty of the scenery. 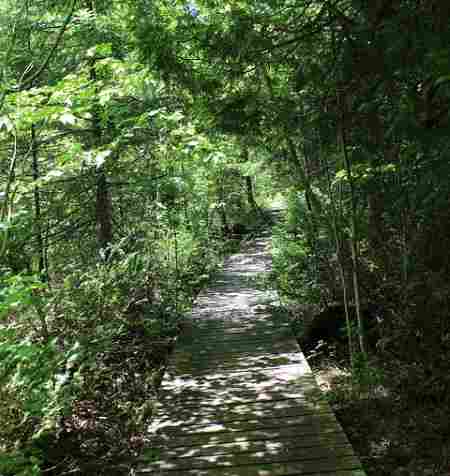 Flowerpot Island's Beautiful Loop Trail To Hike Around The Island

Perhaps the most unique of all the plants one sees as they walk the island trails are gnarled tiny trees that dot the landscape, especially along the shoreline. At first glance one thinks that these are young plants waiting to grow to full maturity. But, most are many centuries old. In fact, one of them is considered to be the oldest tree in Canada! Scientists calculate that it is more than 1600 years old! The growth has been limited by the lack of soil between the cracks and crevices of the rocky outcrops along the shoreline. 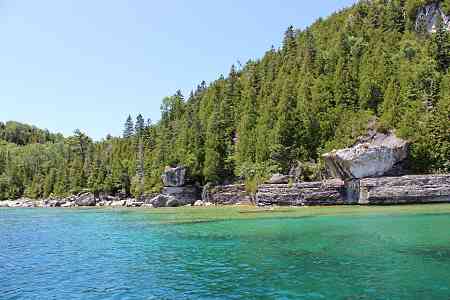 When traveling a flowerpot island boat trip, upon reaching the island’s eastern shore, there is an even more astounding sight to behold. There standing on the shoreline, like two majestic sentinels warning passersby of the presence of the island, stand two stone structures, carved over time by the wind, rain, and the waves to look like large flower pots. 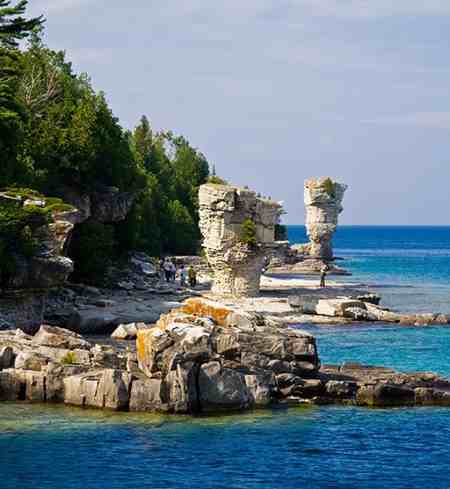 Flowerpot Islands Flowerpots at the Tip of the Bruce Peninsula

An Indigenous Tale of Romance!

Although early sailors likened the structures to ancient Roman wine jars, there is another story behind the flowerpots that predates the earliest visitations by Europeans to the region. It is a native legend, not dissimilar to Shakespeare’s tale of Romeo and Juliet.

Many centuries ago, there were two native tribes who lived on the Bruce Peninsula. Unfortunately, these two communities spent more time fighting each other than they did working as allies. At one point in history, a young man from one of the tribes fell in love with the daughter of the chief of the rival clan.

After many clandestine meetings the young couple decided to get married. Knowing that neither of their families would favor such a union, they decided to elope. Late one night the two lovers met near the princess’s encampment. It was not long before the Chief’s daughter’s absence was discovered. Suspecting that an elopement had occurred, the men of the tribe were soon in hot pursuit the young couple.

The lovers made their way to the shoreline, where they boarded a canoe. With the young woman’s tribe in hot pursuit they paddled frantically towards the island on the horizon. When their pursuers arrived at Flowerpot Island, an extensive search failed to produce the couple. It was as if they had been swallowed up in the night.

Native legend suggested that the island was the realm of evil spirits and consequently, it had never been inhabited. It was believed that evil forces had engulfed the couple and they were never seen again.

What became of the young lovers who perhaps journeyed on the first romantic flowerpot island boat trip, will never be known. But, if you look carefully at the top of the largest flowerpot, you will see what appears to be the profile of a native warrior carved in the stone! 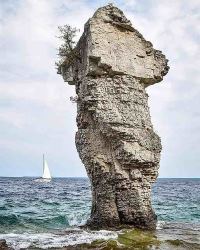 Can You See The Native Warrior's Profile?

Our Flowerpot Island boat trips have been very enjoyable and we encourage you to take a tour to this truly unique Georgian Bay island.

Georgian Bay's 1st Pioneer Settler In 1825 or 1826, depending upon the source, a lonely figure in a birch bark canoe could be seen paddling the waters of Georgian Bay.

Pioneer Travel Aboard the Fly  Tells the story of a sailing vessel as the tenuous link between survival and death in a pioneer settlemnt in the 1840's in Upper Canada.

Chicora the final stage of an 1871 cruise ship's voyage on the Great Lakes.