Spring time marks the beginning of the ferry boat service when "the Big Canoe," also known as the Chi-Cheemaun  leaves her winter berth in Owen Sound harbour. 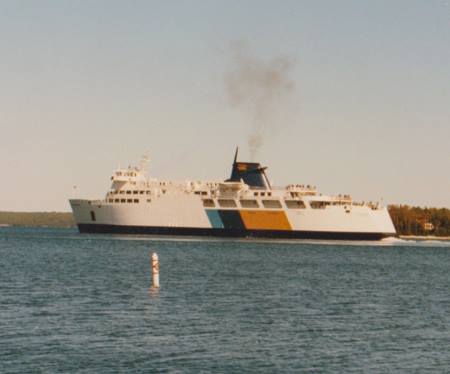 She then heads to Tobermory for another season of shuttling cars and passengers between the Bruce Peninsula and Manitoulin Island.

For more than a century, ferry boat service has been an important part of the region's economy.

Ferry Boat Service Starts as Part of a Railway

However, in the beginning, the idea of ferry connection between the Bruce Peninsula and Manitoulin had nothing to do with cars and highways. Instead, it was thought that a system of ferry boats could provide a railway link to the North Shore.

Francis Hector Clergue, whose entrepreneurial talents led to the development of the Algoma Steel Company in Sault Ste. Marie, in 1901 envisioned a railway connecting the Bruce Peninsula with Manitoulin and the North Shore of Georgian Bay. In 1899, Clergue attained the charter for the Manitoulin and North Shore Railway. The next year, 1900, he obtained the necessary charter to allow a link between Manitoulin Island and the Bruce Peninsula. Unfortunately, despite the appeal of a shorter route to Toronto, Clergue's idea never got past the drawing board.

The concept of a ferry system for the region did not die. In 1917 John Tackaberry, a Lion's Head businessman, purchased the steamer, “Henry Pedwell,” and started a car ferry operation up the coast of the peninsula to Manitoulin Island.

Tackaberry owned an automobile dealership in Lion's Head and probably wanted the ferry system not only for transporting car travelers, but also for delivering new cars to customers on the North Shore.

In the mid-1920s, Tackaberry sold the “Pedwell” and replaced it with the “Alice” which he refitted to carry automobiles.

In 1928 he sold the “Alice” to the Dominion Transportation Company which renamed her the “Hibou”. That same year, 1928, Tackaberry's new vessel, the “Island Princess”, began the first regularly scheduled service between Tobermory and South Baymouth.

Tackaberry's company was not the only group interested in the ferry service to the North Shore. In 1921, a group of Owen Sound businessmen which included Captain Norman McKay formed the Owen Sound Transportation Company. A decade later, in 1931, this company received a charter from the Ontario government to establish a regular ferry service between Tobermory and South Baymouth. That summer the Owen Sound Transportation Company put the “Kegawong” into service on the line.

The “Kegawong” already had a history as a ferry boat in the area. It had been previously owned by Tackaberry and had sailed under the name “Henry Pedwell”.

In 1930, the Owen Sound Transportation Company purchased another vessel which they planned to use in service to the North Shore. The ship was the American fire tug, “James R. Elliott”, which had been built in 1902 in Port Huron, Michigan. The Owen Sound company sent the “Elliott” to Midland's Georgian Bay Shipbuilding Company to be refitted, at a cost of $80,000 for summer ferry use and passenger and freight service.

The “Normac” sailed between Owen Sound and Sault Ste. Marie during the 1931 sailing season. The next year, 1932, it began twice a day round trip service between Tobermory and South Baymouth. The Normac left Tobermory at 12:00 noon and 6:00 p.m. and made return trips from Manitoulin at 9:00 a.m. and 3:00 p.m. each day.

Prior to 1931, the ferry service between the Bruce Peninsula and Manitoulin Island was sporadic and, in reality, more of a packet line. However, it seems the granting of a ferry boat charter to Owen Sound Transportation Company marked the true beginning of the regular ferry system which continues to this day as the  Chi-Cheemaun plies the waters between Manitoulin Island and Tobermory every summer day.