Ferry boat service increased in activity after 1930 between Tobermory at tip of the Bruce Peninsula and Manitoulin Island. 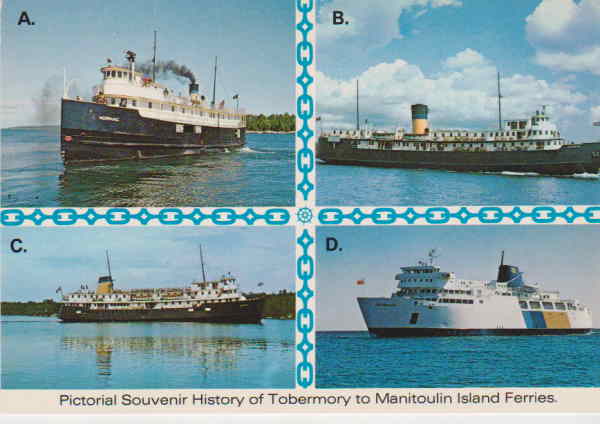 The ferry boat service between Owen Sound, the Bruce Peninsula and Manitoulin Island encouraged a growth in tourism in the area during the 1930s. However, while this situation may have proved to be a boon to one sector of the region’s economy, it also may have encouraged the end of another commercial enterprise in the area.

Advertisements in the 1930s enticed travelers to visit Manitoulin Island. The lure of  the unspoiled natural beauty of the region was extolled in eloquent prose. The enticement to travel to the area was further heightened with descriptions of the easily accessible roads. The question of the quality of the roads was however questionable. The Bury road to Tobermory was given a gravel top in the late 1920s. But locals said that the road would “still make a fisherman seasick”.

The Dominion vessels, "Caribou" and "Manitou", went into service on the line with the "Hibou" and the "Normac". Unfortunately, the "Hibou" sunk at Owen Sound in the fall of 1936. In 1939 the "Manitou" was sold, leaving the "Normac" and "Caribou" to handle the ever-increasing traffic between the peninsula and Manitoulin Island.

The ferry boat service became known for its long waiting period for passage, as cars lined up for hours waiting for their turn on the small ships. The "Caribou" could only take 13 cars and the "Normac" 12. The two vessels would make six return trips a day, starting at 6:00 am and ending around 2:00 am the following morning. It was reported that during the weekends there were as many as 150 cars waiting to board. To accommodate the demand, the ships often ignored their schedules and tried to cram in extra trips, to try and ease the waiting times for often impatient travelers.

Many who traveled on the ferries during that era recall entering either Tobermory or South Baymouth in the evening and seeing the sky lit up by the fires of the campfires of stranded travelers. The two ports were small villages and prior to this influx of travelers there had been little need for commercial establishments to service the needs of the ferry boat passengers. Fortunately, entrepreneurs saw this need and both communities soon saw the development of commercial establishments to service this need.

Ferry Boat Service Improves with the Building of the "Norisle"

To improve the ferry service, the company had a new boat built at the Collingwood shipyards in 1946. The 1,668 ton "Norisle" went into service in 1947. Her capacity was much larger than any of the previous vessels which had served the ferry line. The "Norisle" could carry 248 passengers, including a crew of 47, as well as 50 automobiles.

By promoting the ferry service and making Manitoulin Island and the Peninsula a destination point for travelers, the Owen Sound Transportation Company may have hurt another part of their enterprise.   As the popularity of travel to the region increased, more roads were built.  Soon most of the outports in the region were accessible by road.  Consequently, trucks could now pick up and drop off the produce which had once been carried by the company’s vessels which plied the waters around the peninsula and Manitoulin.  In their efforts to open up the region to encourage the use of the ferry boats by tourists, the conditions had been created which may have destroyed the coastal shipping trade.