Allenford United Church history details not only some important information about that community's church, but also about one of the founders of this Ontario community.

This week as I was looking through the family archives, I found a wonderful little book, the History of Allenford United Church.  Church histories are valuable research tools for historians and this book is no exception. Because the early settlers often made religious services an important priority in their new communities, the building of a church was often one of the first priorities of a new settlement. With the erection of a church building came the keeping of records and from these records one can find out much information about that community. 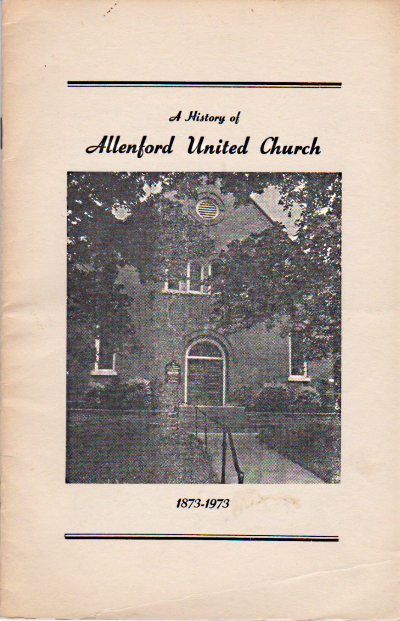 Allenford is named after one of the earliest settlers in the area, James Allen. Prior to Mr. Allen founding the community of Allenford the area was called Driftwood Crossing. It was at this point on the Sauble River that natives crossed the river on their way to Georgian Bay from Lake Huron.

James Allen settled in Amabel Township in April 1857 on Lots 9 and 10 of Concession A of Amabel. The first religious services were held in Mr. Allan's home.  In the beginning a Wesleyan Methodist minister, Reverend Dyre conducted the services. He was followed by Reverend David Williams who tended to the spiritual needs of the community from 1869 to 1872.

By 1873 the Allenford area was large enough to justify the building of a church. Once again it was James Allen who provided the impetus to fulfil the spiritual needs of the community. He donated the land for the building and the present Allenford United Church is located on the land used for the original house of worship.

A formal deed for the property was drawn in 1876. It was drawn for the sum of Two Dollars and was between James and Elizabeth Allen and the trustees of the Allenford Methodist Church.  Reverend William Clowes Jolley acted as a witness to the signatures.

The hard-working researchers who created the history of Allenford United Church also printed the contributions made by all the members of the various congregations in the Circuit. Space does not allow me to print the offerings made by these early settlers, however, they ranged from $0.25 to $25.00. My great grandfather, Robert Forsyth, contributed $7.00 in the 1884-85 session.

In 1885 James Allen's leadership in the community was recognized and he was named by the government of the day to the position of Indian Agent at nearby Chippewa Hill. He held that position until his death at the age of sixty-nine in 1895.

Once again, the researchers of the history of the church provide us with some interesting detail about the funeral. The natives from Chippewa Hill came to the funeral in wagons, on horseback and on foot. They tied their horses at the 25th sideroad of Arran Township, and from there they marched beside the hearse in a solemn procession, while the native band played "Home Comrades, See the Signal" and "Shall We Gather at The River". At the Allenford Methodist Church the service was conducted by Reverend J. H. Dyke with assistance from Mr. Allen's eldest son. Mr. Allen and his wife, along with two of their children, are buried in the little cemetery to the east of the church.

The information used in this article came from many sources, however, the official History of Allenford United Church, 1873-1973, was an important primary source. I would like to thank those who researched and compiled this book as it has provided me with some insight into the community which was home to my mother's family and some valuable information about life in early Bruce County.

A version of this story first appeared in my Local History column in the Owen Sound Sun Times.

Disclaimer: Some links on this site are Amazon affiliate links. If you click on a link and make a purchase,

I may receive a commission but your price will not change.