Jean Beliveau, an outstanding hockey player, baseball player, a nice guy who in Quebec City was known as the "Ice Cream Man". 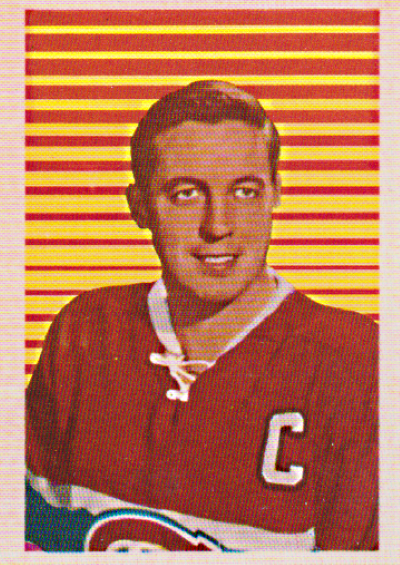 “No matter how many people will approach you with money and gifts and offers that seem ridiculously easy, you must remember that nothing comes free in this life, and that hard work and discipline will make you who and what you are.”

Jean Beliveau recalled these words from his father, Arthur, in his autobiography, Jean Beliveau: My Life in Hockey. Anyone who takes the time to examine Jean’s career, both on and off of the ice, will realize that his father’s approach to life had a huge impact on him!

Jean Beliveau, the eldest of Arthur and Laurette Beliveau’s eight children, was born on August 31, 1931 in Trois Rivieres, Quebec. When Jean was 6 years old his family moved to Victoriaville. Each winter, his father built a rink in the backyard and it was there that young Jean first learned to skate and hone his hockey skills.

At the age of 12, he began playing organized hockey in the Sacred Heart Academy house league. Three years later, Jean not only played hockey for his school, College de Victoriaville, but he also played Intermediate “B” hockey with the Victoriaville Panthers.

Jean Beliveau was an all-round athlete.  In the summers he played baseball, dreaming of one day playing for his favourite team, the Boston Red Sox. His prowess as a pitcher and a hitter attracted the attention of baseball scouts and he was offered a contract to play in the minor professional leagues in the Southern United States. However, his mother had other ideas. The thought of her eldest son going so far from home, prompted her to refuse to let Jean sign the contract.

In 1947, at the age of 16, Jean Beliveau first came to the attention of NHL scouts. One day, after a practice with the Victoriaville Panthers senior team, the coach of the Trois Rivieres Junior team, who also scouted for the Maple Leafs, tried to convince him to sign a contract with Toronto. However, his father turned down the offer, telling his son that he was too young and that there would be plenty of time to sign a contract. For the next five years, where and when Jean would play in the NHL was a hot topic of conversation in Quebec and elsewhere.

The next season, interest increased even further, when the 17 year old Beliveau scored 47 goals for the Victoriaville Panthers Intermediate team. The Montreal Canadiens made many attempts to sign Jean to a “C” form. But, each time they were rebuffed by his father, who did not like the idea of signing a contract which would tie his son to one team for the rest of his life. Finally, the Canadiens offered the Beliveau family a contract that they could accept.

However, before the season started, a dramatic change occurred in Quebec junior hockey. The Montreal Canadiens provided the funds necessary to almost triple the number of teams in the league. Roland Hebert, the coach of the new Victoriaville team convinced the Canadiens to release Jean from his contract in order to allow him to play for his home town. Beliveau signed a one-year contract. In his first year with Victoriaville, Beliveau won the league’s Rookie of the Year and the Most Promising Professional awards.

The next season, 1949-50, Beliveau signed to play with the Quebec Citadels. At the beginning of the 1950-51 season, he attended his first Canadiens’ training camp. Before he left for Montreal, Frank Byrne of the Citadels told him that Quebec would match any offer made by the Canadiens.

Jean’s popularity in Quebec City was so immense, that some sports writers started calling Le Colisee, “Chateau Beliveau”! During his first season in Quebec, he hosted a radio program for youngsters. The sponsors of the radio program, Laval Dairy, took further steps to latch onto their rising hockey and radio star. They had a special cooler built for the trunk of Beliveau’s car. The cooler was filled with Laval ice cream products and when Jean drove about the area he would stop and hand out free ice cream to kids. Thus, he became known as the "Ice Cream Man". This early exposure to marketing techniques would prove beneficial later in his life.

Twice during the season, the Canadiens called him to play in the NHL. In his second game he scored his first NHL goal against Chicago’s Harry Lumley. The Quebec City fans, at the end of his junior career, surprised their young hero with a special night. Among the honours and gifts bestowed upon him was a new 1951 Nash automobile.

This sentiment between the fans and Jean Beliveau would prove to be reciprocal. He opted to play with the Quebec Aces. His decision was in part, a way of showing his gratitude to the fans of the community. The Canadiens, who were eager to have the budding superstar in their line-up, were upset at losing him to the Senior club. Therefore, an attempt was made to change the CAHA rules regarding graduating junior players.

A proposed new regulation stated that any player on an NHL negotiation list had to sign a contract with that team. If they wished, instead, to play senior hockey, the senior team would have to strike a deal with the NHL club which held the player’s rights. It appeared to most people that this new law was directed especially at Jean Beliveau. Thus it became known as the “Beliveau Rule”. Fortunately for the Aces and Beliveau, the new rule was never enacted.

After playing two seasons for the Quebec Aces, and winning league scoring titles in each campaign, Beliveau signed with the Montreal Canadians at the start of the 1953-54 season.

Beliveau’s decision to play in Montreal actually may have been hastened by an event which occurred a season earlier. Zotique Lesperence, Vice-President of Public Affairs, approached him about working for Molson’s.  After the season ended, Jean agreed to work for the brewery. He went to Montreal to train for his position and also signed with the Canadiens. Little did he realize that this relationship with Molson’s would last long after he retired from hockey and that the training he received would stand him in good stead both in and out of the sport.

When Jean Beliveau retired from hockey in 1971 he planned on continuing his association with Molson’s. However, he was surprised by another offer, which he received from David Molson. The Canadiens’ executive proposed that he remain with the hockey club as a marketing executive.

Before he could become settled into the second floor executive suite of the Canadiens Jean received another tantalizing offer. The World Hockey Association was in its formative stages and his old hockey home, Quebec City, was icing a team in the new league. Two old friends, Paul Racine, an owner of the club, and former team mate, Jacques Plante, the general manager, proposed a lucrative contract to Beliveau. However, Jean reasoned that if he wanted to play he would stay with the Canadiens. Consequently he turned down the offer made by his two friends.

Jean Beliveau entered his retirement from hockey in style. His last game was played in Chicago on May 18, 1971. On that evening, at the end of the game, Jean Beliveau the captain of the Montreal Canadiens hoisted the Stanley Cup above his head and led his team in a victory lap around the Chicago Stadium.

Jean had announced that he planned to retire at the end of the 1970-71 season. On March 24, 1971 the club held a special night in his honour. Beliveau told the Canadiens that he did not wish to receive any gifts, but that money could be donated to charity in his name. Much to his surprise on the evening of the special presentation, Jean was given a cheque for $155,855. This created the funds necessary to finance the Jean Beliveau Fund. For the next two decades the fund grew, and Jean was able to contribute to many charitable organizations. When he retired as an executive of the Canadiens Beliveau gave the remaining funds in the trust to the Quebec Society for Disabled Children. The $900,000 was designated for use at a summer camp near Joliette.

It is evident Jean Beliveau’s life, both on the ice and off, was directed by the wisdom of his father’s words.

Syl Apps: A Maple Leafs Icon whose smooth skating HHoF talents make him one of the greatest All-Time hockey players in the history of the NHL. Ironically, before he became a Maple Leaf one NHL general manager decided not to sign him to a contract solely because Apps had aspirations of becoming a minister!

Jean Beliveau, an outstanding hockey player, baseball player, a nice guy who in Quebec City was known as the "Ice Cream Man".

Alex Faulkner: NHL Pioneer only played one game as a Toronto Maple Leaf, but to hockey fans in Newfoundland it was an important hockey game!

Forbes Kennedy suited up for 13 regular season games and one playoff game as a Toronto Maple Leaf. But a lot can happen in 14 hockey games!

Ted "Teeder" Kennedy a Leafs Legend was almost a member of the Montreal Canadiens but a homesick 16 year-old changed that by leaving Canadiens training camp for home.

Hockey history: Florida details the one-year life of the Tropical Hockey League that entertained fans in the south Florida region in the late 1930s.

Larry Jeffrey started his career as a Red Wing, won a Stanley Cup with Toronto, had a short stint as a Ranger and then retired to the beach in Goderich, Ontario!

Rocket Richard, Montreal Canadiens superstar sniper was a goal-scoring nightmare for goalies especially for one NHL goaltender in particular.

Paul Henderson: A Canadian Hockey Hero, "I scored six really good goals and the garbage goal is the one that everyone remembers.”

W.O.A.A. - Western Ontario Athletic Association was the idea of one man that grew to successfully promote sports in western Ontario.

Hockey history is full of surprises, amazing stories and athletes who never cease to surprise. It is more than just stories about the NHL, it is tales from the minor leagues, the bush leagues, and much more. And, it is not just a Canadian story.