Growing Up Hockey:
A Book Review

Brian Kennedy's Growing Up Hockey (Folklore Publishing) will touch you in many ways, especially if you grew up in Canada or the northern United States. The Foreword by former NHL goalie Kelly Hrudey not only prepares you for what lies ahead in the pages of the book but also demonstrates the similarity of experiences between himself and the author (not to mention most readers).

Kennedy takes the reader on a lifetime excursion from playing hockey in the streets and arenas of suburban Montreal, to Peterborough, Ontario, and on to southern California. Along the way, there are hockey experiences of all kinds that will jar your memory and bring a constant smile to your face. There are trading card experiences, bullies, street hockey, backyard shinny, and the elation of heroes winning the Stanley Cup.. But most of all, hockey can be found in some form or another, etched lovingly on every page of Growing Up Hockey.

As you start into this book you are overtaken not only by Kennedy’s words, but also by your own memories. You will catch yourself, thinking or saying out loud, “Hey, that happened to me too!” 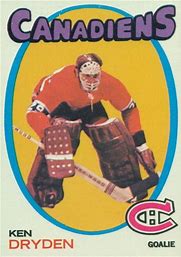 Growing Up Hockey, and Kennedy’s life in hockey, begins on a deserted schoolyard rink. Brian’s pair of double-runner skates reminds us all of shuffling along the ice pushing a chair or desperately hanging on to a hockey stick or a helpful parent’s hand.

Street hockey took the need to excel as skater out of the equation of becoming a great hockey player for most of us, and Kennedy was no exception. His street experiences of emulating his hockey heroes will trip the recall button for all readers.

The author’s tales of becoming a goalie and then working to get goalie pads and the other accessories necessary to fulfill the ambition of being like his hero, Ken Dryden will make you laugh and perhaps remember your own attempts to mimic your hockey hero.

Like most of us, hockey cards for Kennedy, had a high value, especially cards of his hero, Ken Dryden. Only that value was not quantified in dollars and cents. Hockey cards were cherished for who was on the face of them, and if a pack was opened and a player from an enemy team was discovered it was suitably scorned. Kennedy described this situation for himself and his friends when they were about to open a pack.

Opening the pack was like discovering some unknown tribe for the first time. You didn’t know what would be there when your canoe rounded the bend in the river, but you had so much invested in the experience that your hopes were sky high.

The quest of finding good cards led youngsters to look for omens when they opened their packs. Kennedy described one of these omens:

Whoever was on the top would set the tone. Marcel Dionne? Good, but where was L.A. anyway? Gordie Howe? Wow! A goalie – almost anyone – was jackpot. Also highly favoured were special cards like “J.C. Tremblay First Team All Star”.

Unlike today, where the value of a hockey card on the memorabilia market has surpassed for most the sense of excitement of finding the card of a favorite player or a favorite team, this was paramount for Brian and his friends. He described this circumstance”

Did the pack have a Guy Lafleur, or just another Dave Keon? It seemed that we always got an abundance of cards with the hated Toronto Maple Leafs on them.

In some ways, reading Growing Up Hockey is like meeting your street hockey and minor hockey friends and teammates thirty years later over a cup of coffee and rehashing your glory years as a hockey star!

But, if you did not grow up with the game of hockey you can still enjoy this book. It just might help you understand the deep attachment and fanaticism that some of us have for the game!

The author, Brian Kennedy, teaches English at Pasadena City College and you can experience more of his exuberance for the game of hockey at insidehockey.com where he covers the L.A. Kings and the Anaheim Ducks. Growing Up Hockey is published by Edmonton's Folklore Publishing.

Growing Up Hockey  will touch you in many ways, especially if you grew up in Canada or the northern United States. The Foreword by former NHL goalie Kelly Hrudey not only prepares you for what lies ahead in the pages of the book but also demonstrates the similarity of experiences between himself and the author (not to mention most readers).

David Halberstam's October 1964 reveals how one team, the St. Louis Cardinals', openness to signing black baseball players benefited them on and off the field.

Eddie Mathews and the National Pastime - A Review tells the story of not only one of the greatest third basemen in baseball history, but also the story of one of my heroes

Sports Book Review: The Mooseheads provides the reader with an interesting perspective as how this team from Canada’s Maritimes became a powerhouse in Canadian Junior Hockey as it details the team’s first decade of play in the Quebec Major Junior Hockey League.

Sidney Crosby: A Hockey Story provides a detailed look at Crosby's amateur hockey career before he was drafted first over-all in the 2005 Draft and the book gives an interesting overview of the history of hockey in Canada's Maritime Provinces.

Sports Book Reviews go beyond stats, etc to give you a sense of the reading value of a book.