Less than 200 years ago, a nation existed that spanned more than two million acres. Today its domain spans little more than 30,000 acres.

Canadians tend to think that history begins with the arrival of the first European settlers to North America. Unfortunately, this attitude ignores the fact that North American history spans a much broader time than a few centuries.

Many will argue that because many of us are of European descent it is important that we understand our heritage. I agree whole-heartedly. It is also important that we know about what life was like on the peninsula before our forefathers arrived.

The history of our country before the influx of settlers from Europe can be more than merely an educational exercise; it can also be extremely entertaining and enlightening. Unfortunately for us, the native history of Canada has not been documented in vast scholarly libraries. Instead, much native heritage and tradition has passed from generation to generation by word of mouth.

Efforts are now being made to document this history.

This summer I had the good fortune to read The History of the Saugeen Indians, by Peter Schmalz. Although this book was researched and written in the 1970s, it contains a wealth of information about native life in the Grey and Bruce region before European settlement.

Prior to the opening of this region for settlement the Bruce Peninsula and Saugeen River watershed had been populated by various native nations during the course of time. Prior to the mid-17th century the Ojibwa, Ottawa, and Potawatomi nations lived in this region.

The arrival of French explorers signaled the beginning of the fur trade. The natives, especially the Hurons, developed an active trade in furs with the Europeans.

This circumstance led to tension between some of the tribes. Consequently, wars occurred and by 1649 the Iroquois had defeated the Hurons to the point of almost total annihilation.

With their ally defeated, the Potawatomi and Ojibwa moved further west leaving the Bruce Peninsula to the Iroquois. Half a century later the former inhabitants of the Bruce would return to oust the Iroquois from the region.

For the next century the Ojibwa nation would live in relative peace on the Bruce Peninsula and lands of the Saugeen River watershed. The Ojibwa Nation consisted of the Wahbadick, Newash, Wahwahnosh and Metegwob tribes.

The man at the forefront of the movement to claim more land from the natives was the governor of Upper Canada, Sir Francis Bond Head. 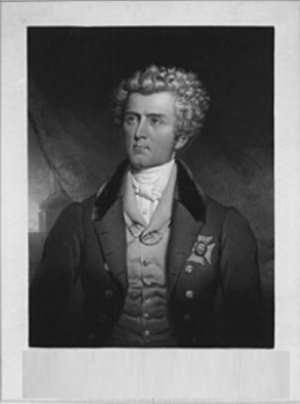 Using the guise of concern for the natives, Bond Head started a campaign to remove the natives from contact with the white settlers. Writing in 1836 the governor stated that "the Indian breathes pure air, beholds splendid scenery, traverses unsullied water, and subsists on food which, general speaking, forms not only sustenance but the manly amusement, as well as occupation, of his life." He also voiced concern about the impact of foreign diseases and alcohol on the native population.

For these reasons Bond Head then came to the conclusion that civilization was "against the Indian's nature" and that they could never become members of the civilized community.

Thus, the governor began a quest, not to just move the natives onto small reserves, but to remove them to an area of land where they would be totally isolated from white society and all of the rest of the land in the colony would therefore be available for settlement. It was his idea to remove all of the natives in Upper Canada to Manitoulin Island.

Parts of this article originally appeared in my Local History column in the Owen Sound Sun Times.

The Aboriginal History of the Bruce Peninsula is an interesting microcosm of the aboriginal history of Canada. Exploring the pages that follow you will read about the numerous treaties that impacted the lives of the indigenous peoples of the peninsula.

Aboriginal History: The 1836 Treaty made promises to the native peoples of the Bruce Peninsula which did not last long before everything changed again.

Aboriginal History: the Bruce Peninsula has a long indigenous heritage not just for the native nation living there today, but for other native groups as well.

Catherine Sutton: aka Nahneebahweequay was a hero, fighting for her Indigenous rights and those of her family. She took her issues to Queen Victoria.

Settler Impact on Bruce Peninsula Natives was not only from the imposition of treaties, but also from British military plans.