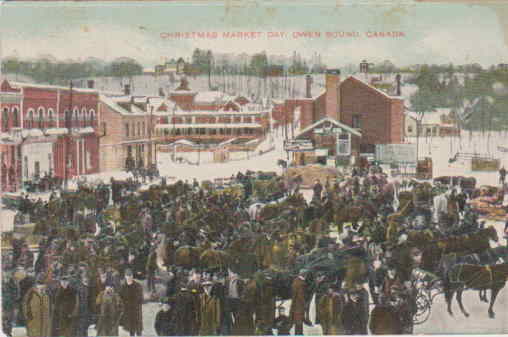 Every year at this time, the discussion at the dinner table often begins with, "Mom and Dad, what was Christmas like when you were children”

Perhaps it was vanity, but we usually related something that our grandparents or parents had told us about their youthful experiences at Christmas. This year it was pointed out to us that our childhood Christmases were indeed a long way in the past. (Guess which kid is getting a lump of coal in their stocking this year!)

As I thought about this remark, I remembered a question that my daughter Tara posed to me more than 10 years ago. She asked me what our Christmas tree looked like when I was a youngster. When I replied that it was much like the tree that she had helped to decorate, she responded with '"You mean, you had electric lights and not candles on the tree?"

Putting all this together, along with the fact that my cousin Ken, who isn't much older than I am but is a grandfather, I decided that perhaps it was time that I write about Christmas in Owen Sound back in the prehistoric times. (Now, I, too, am a grandfather with wonderful grandchildren)

The Christmas season began in Owen Sound with a Santa Claus parade, not at the start of the Christmas shopping season as it seems to be today — but much, much closer to the actual day. It seemed that the whole city closed for the parade. Second Avenue East was lined several rows deep on both sides from 10th Street to city hall.

After the parade, all the children went to the back of the old city hall where Santa Claus climbed down from his sled and gave each of us a big bag of candy. We all went home munching our candy and planning our letter to Santa.

A few days after the parade, radio station CFOS began broadcasting a program that most every family in the area tuned in faithfully every evening. Santa Claus with his invisible helper, Peek-a-Boo, would read our letters on the air.

Peek-a-Boo — who can forget his high-pitched voice? — would report on his spy missions around the city on the behaviour of all the young Owen Sounders.

On Christmas Eve, my grandparents came to visit. They told my sister and I, stories about their childhood Christmases while we feasted on grandmother's home-made fudge.

About seven o'clock, the radio announcer would interrupt programming with a report that the Canadian Air Force had picked up an object on its radar screen. Tension mounted in the reporter's voice as he read a further report which stated that the objects on the radar screen seemed to be a tiny sleigh pulled by reindeer, and it was headed for Owen Sound!

Nothing more had to be said, we raced to our beds and buried ourselves under the covers for fear that Santa might pass by our house if he thought we were still awake!

Christmas Day I was up before dawn. Mom and Dad, grumbling, but smiling, gave up trying to keep me in my room, and we went to see what was under the tree. After a quick breakfast, we headed to either my grandparents' house or to my aunt's for Christmas dinner with my cousins. Here we feasted on turkey, cranberries, potatoes, plum pudding and mounds of other festive delights.

After eating and opening more presents, we headed to my father's parents for another Christmas dinner, more cousins and yes — more presents. That dinner was much the same as our noontime meal, but it included my Grandma White's incomparable carrot pudding.

The whole day was spent with family. For entertainment, we didn't go to the movies or watch television, we didn't visit our friends; we just enjoyed being with our relatives. Grandparents told stories or we played games in small groups or all together.

Those were Merry Christmases indeed!